Here is a treat for you older guys!  This was the main fleet transmitter when I first went to sea as a Boy Telegraphist.  We were allowed to look at it, but not to touch it or attempt to clean it.  We knew that it sent signals out of our ship when we tapped our Morse key or pressed the send button on a microphone, but other than that, it was always more important to the ship than were we boys.  Inanimate though it was, it was treated with great respect by those who REALLY knew what it was, and it put the fear of God into us who didn't REALLY know.

The transmitter was an American device and in the Royal Navy it was called a Type 89 with suffixes. Most of our ships of Sloop size [Frigate] and above were fitted with it in the 1940's and 1950's.  In it original package it was simply an 89.

The following table shows the suffixes used in the Royal Navy for transmitter which spilled over beyond the 1950's:-

I joined HMS Ganges in October 1953 and after I had completed my training, I  went to sea in HMS Tintagel Castle in February 1955.  By that time, the 89 had had three major modifications since the war years and was known to me as the 89Q. Morse code was king and RATT, either reception or transmission was unheard of, so the 89Q was used for Continuous Wave [CW] - Morse code to others - and basic Amplitude Modulated [AM] Voice known as DSB - Double Side Band.  Later on, CW became known as A1 and DSB as A3.  A2, which was Morse code using the transmitter in voice mode was originally called MCW - Modulated Carrier Wave, and could be used to send Morse code signals to a distant receiver which was only designed to receive voice signals i.e., it had no BFO [Beat Frequency Oscillator].  As I have said, the 89Q was our main HF transmitter.  Our secondary transmitter was the 60EQR [E for emergency; Q for the 3rd modification and R for  [RUB - we could clean this one ......only joking] - no, it indicated that the transmitter was capable of R/T [Voice] as well as CW.   Our tertiary transmitter was also American and was known as a TCS, a transceiver, but the receive section was rarely connected or used, for it was discovered that its LO [local oscillator] emitted strong radiations out on the common send/receiver aerial when the transmit section was not in use thereby breaking radio silence and giving out a super signal which could be DF'ed [direction finding].  Later on, though for me not in HMS Tintagel Castle, the 89 was further modified so that it could transmit FSK signals for RATT circuits. For VHF and UHF we had the 86M, the 87M, a 691/CUH and the TBS.  We had an FM12 for M/F D/F and a crypto machine called a Type X/CCM. On the receiver side we had two B40's, one B28 and one B29.

A few weeks ago, I was browsing in a local junk shop looking for naval artefacts when I came across the ORIGINAL American handbook for what we in the RN called the 89. It was built in the thousands for the second world war and the Americans called it an ET-4336-B. It was manufactured by RCA Victor Division in Camden New Jersey, the same people who after the war, turned out thousands of hi-fidelity radiograms and audio equipment for the home consumer market. The book front cover has a R.N., stamp which says "Confidential Book Officer H.M. Signal School Portsmouth - 14th June 1946". The R.N., tuning guide was called an S.1695. 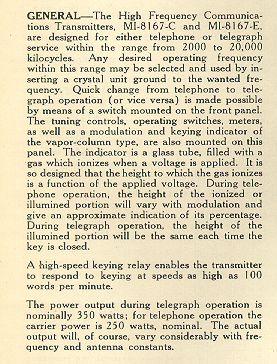 The following pictures come from the RCA users and installation book from which the RN tuning guide was designed, and later, from which the 89 input into the BR222 [1] was copied. I hope that you enjoy a look back to many years ago.