Just a little snippet of no real consequence !

The W/T men amongst you will remember, for example, AFO "S" SERIES and in particular S7 "Commonwealth Naval Ship-Shore Organisation - Guide to Optimum Frequencies for HF Ship-Shore Communications".  There were many other documents published in the "S Series" and these were sometime 'stand alone' instructions, or were instructions which amplified data found in "SP" or "CB" documents, indeed in a whole variety of publications. 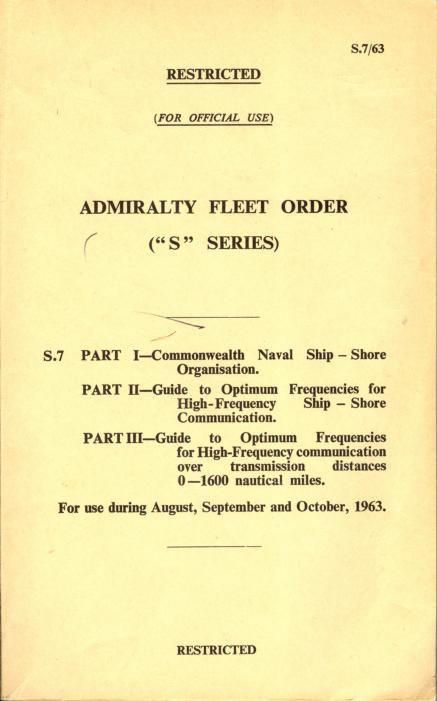 I don't suppose you have ever wondered what other AFO SERIES issues there were, and heaven forbid, neither did I until I was 72 years old and suddenly came across a little list whilst studying at the National Archives. I jotted down a few details before returning to my main study theme.

Here is that little list published to increase your knowledge of the Royal Navy of days gone by.

Click on this thumbnail to see an early NATO document issued as an 'S' Series [S8/1955].  The Brits called the "fighting business" A.I.O. = Action Information Organisation whilst NATO, swayed by the USN, called it C.I.C. = Combat Information Centre. This replaced S8/1952.

In passing, I was also a little surprised to learn a bit about Binoculars and Monoculars.  It would seem that the manufacturing of the monocular {the telescope} for the 18th and 19th century had employed a great number of skilled men, supplying a large navy with both 'action' and 'ceremonial' glasses from admiral down to lieutenant with different patternation and styles befitting their rank.  In the 20th century the requirement for the monocular had reduced demand because it was carried only by the 'brass-hats' and for ceremonial reasons only.  That is well understood, but what might not be well understood, is that the manufacturers of the binocular, used for 'fighting/navigation only and not for ceremony' took the trade away from the monocular manufacturer and by so doing, suppressed a traditional naval enterprise.  Today, many monoculars on sale are manufactured outside the UK.