BOREDOM CAN DO FUNNY THINGS!

Before I tell you this short story, I want to tell you about the Naval education standards and requirement that were in force in 1950, and as far as I was concerned personally, albeit with changed names, still extant in 1970.

This drawing shows a typical ACADEMIC route from joining at aged 15 to achieving fame right to the very top of the Navy. 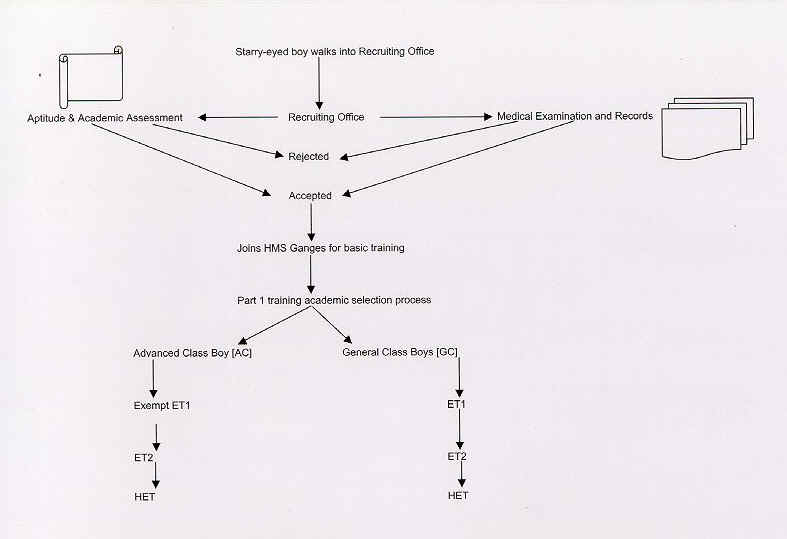 I stress ACADEMIC because to achieve that fame, one had also to navigate the many other routes to the top, which include amongst many others, skills, social graces, top notch at your job[s] and a lot of hard work. I can't quantify those things here, so I will discuss the way in which one gets on to the first rung of the ladder.

Not all boy's could walk from the street and into the Navy even if they were physically fit and raring to go, because the Navy had a starting academic standard, which although basic, ensured that all who attained that pre-set level would stand a chance of completing their basic naval training without struggling to keep up with their peers.

Once in HMS Ganges, a further assessment was made, and the 'clever' boy's were graded as Advanced Class [AC] whilst the remainder became General Class [GC]. Academic prowess didn't affect ones branch training and both the Communicators and Seaman branches had AC and GC classes: there were no other types of sailors at HMS Ganges during my time there. In the GC classes there were border line cases so this was further split into GC[U] Upper and GC[L] Lower - only AC, GC and GC[U] could train as communicators. Although all aspects of Ganges training for communicators were assessed [examined and marked] which included PT, Gunnery, Seamanship, Parade Training, Mast Work, Kits etc, only SCHOOL work and BRANCH [known as TECHNICAL] work were assessed for the overall pass mark.  There were three passing out grades all assessed on a total possible [though highly improbable] of 1000 marks, and these were 1st, 2nd and 3rd class passes. A boy with a 1st class pass was awarded TWO MONTHS accelerated advancement whilst a 2nd class pass earned ONE MONTH and the 3rd class no accelerated advancement.   More of that accelerated advancement in a moment but in the meantime have a look at this picture which shows you my passing out marks and grade.

After leaving training to join the fleet, there was just one more test one had to pass to become "educationally qualified" for promotion right up to an including Chief Petty Officer, and that was called ET1, or, Educational Test 1.  ET1 was a test in English and Mathematics- just two subjects.  For those less able, it was a difficult test.  Former AC boy's were exempt, and their AC grading in HMS Ganges would be their only academic testing point, although of course, many aspects of their specialist Part II training would require a reasonable knowledge of Mathematics and English. This little [crooked - sorry] picture is the way the RN promulgated these very important examinations.

The next test was ET2 or Educational Test 2.  I was never sure why they had this test, because it lead to nothing: no qualification or extra money, but it could lead to being advanced in ones next higher rate by two months so implicitly there was extra money on a promise!  I was coerced into taking this examination by the 2nd Training Squadron Schoolie at Portland in 1955.  All TS2 ships day-ran from Portland and regularly left crew members inboard for various reasons and to make room for ASW students from HMS Osprey. The squadron had many boys and we attended school which was next to the Regulating Hut on the main road leading to the Fleet Canteen [now, or was, the Air Station]. There, we were grouped together notwithstanding our ability, the majority of the boys doing their ET1. On the morning of the ET1 examination we were all given our paper, face down of course, and upon turning it over, I, and three other boys saw that we were sitting an ET2 exam.  All four of us passed, and to my amazement [and probably to theirs too for we all four passed and passed well] I was told to clean into a blue suit to attend the Captains Table for Requestmen and Defaulters - the reward and punishment parade.  There, as a Requestmen,  I was told by my captain, Commander Carrington RN of HMS Tintagel Castle, that I had been awarded TWO MONTHS accelerated advancement based upon my marks in the ET2 exam recording a FIRST CLASS pass. Our Coxswain [we didn't carry a Master-at-Arms] told me to salute, right turn and double away, and that was that.  Later on, the ET1 became known as NAMET [Naval Arithmetic English Test] and ET2 was no more

In 1957 I was advanced to the Able Rate, to become a Telegraphist.  At the time of advancement I was awarded ONE MONTH accelerated advancement by the Captain {Captain Le Fanu of the carrier HMS Eagle} which added to my previous FOUR MONTHS gave me a back-dated advancement of FIVE MONTHS to the rating of Telegraphist.  On paper this meant very little to me and I didn't see the Captain on this occasion.  However, come the next pay day [and in those days we were paid in cash] I soon realised what FIVE MONTHS of accelerated advancement meant in cash-terms for I was rich beyond all understanding receiving five months back pay of the difference between an ordinary telegraphist and a telegraphsts pay.  In 1957 also, I took two HET exams.  HET meant Higher Educational Test and was the equivalent to the General Certificate of Education  at ordinary level [GCE O]. I gained a '4' in Applied Mechanics and a '3' in Applied Mathematics. Once again, I took them because I was bored and the Schoolie was greatly enthusiastic and taught his classes with great zeal and drama.  NOTE:  When I was leaving the Navy in 1983, a company wanted proof of my educational qualification.

This letter was written and is self evident in supporting my certificate below. A grade '3' and '4' were equivalent to a GCE O at Grade B. From 1957 to late in 1967, I did little formal education.  However, I read a great deal and could hold my own on many subjects with my peers and superiors. In the 60's, being at sea in a submarine and dived was not a good place to be for those with an active mind.  It has changed today with nuclear boats. Those not on watch got 'their heads down' [went to sleep] so our living/sleeping/eating/relax area was in darkness.  {Operationally, this modus operandi  reduced the drain on the main battery and cut down the heat factor inside the boat by turning all unnecessary lighting off}. I was one of them of course, but I got to wonder what life was all about and how I could escape. Then, whilst at home with my wife and children in Singapore after a longish period at sea, I got an idea.  I would stride into the local barracks, HMS TERROR, and put my name down for the forthcoming GCE examinations.  This I did, despite that I had no formal instructions or personal study preparation.  "And what subjects would you like to sit Petty Officer" asked a shy young WREN sitting in HMS Terror's information centre.  "Oh, er, English Language...the General paper and Mathematics" I  said. Why, I thought to myself, English is a doddle; General is no problem and I will read the Straits Times [Singapore and Southern Malaysian equivalent to The Times in the UK] for the next couple of days to get all gen'ed-up, and Maths is my favourite subject [and it really is] and I should eat that paper. The day came [Friday 6th October 1967], and off I went to HMS Terror, all dressed up in my nice white uniform.  Believe it or not, I was just as cockey at the end of the papers as I was when I first talked to the shy young WREN.  I had passed - no problem.  When the result were made known, I had indeed passed all three papers, but the English  and the General Paper by the 'skin of my teeth' getting a grade 6 which is a GCE O Grade C. I did much better on the Maths  paper getting a grade 3 which is a GCE O Grade B.

From that time on I got the bug for education and loaded all my available submarine personal space with books and correspondence course material, hell-bent of kicking this sleeping and boredom.

After all, my wireless office had lights so I could, and did work in there. I now had five GCE's and decided to take another five at the next exam which would be in March 1968.  This time there was no room for complacency and I studied hard. I took the exams, again in Singapore [HMS Terror],  and passed all five with commendable results - 1 grade A; 3 grade B and 1 grade C.

.  This is my history paper - can you answer the questions? In 1983 I studied for A levels in English and History, but didn't take the examination as I was pre occupied with getting a job in civvy street. However, since that time I have studied for and have successfully achieved a HND [Higher National Diploma] which is the equivalent of a Degree.  Below, is a picture of an original HET paper from 1951 before the test was comparable with a civilian qualification.  In those days [I left school in 1953], the final examination before leaving school was called simply the "SCHOOL CERTIFICATE" or the "SCHOOL LEAVING CERTIFICATE".  This was only awarded on merit and the successful completion of a series of final examinations, to Grammar School
pupils.  Prior to these times [which included my parents school days] the word "MATRICULATION" was used to convey the notion of completing ones formal secondary education.

This DCI[RN] of nearly forty years ago, tells us what educational qualifications were needed for various types of officer, whether on promotion from the lower deck, or for those joining the Service from civilian life.

P.S. Two subjects at HET level, were required for promotion to warrant officer when introduced in 1972.