This is page FIVE

I took these photographs from a Victorian Magazine called the ARMY AND NAVY REVIEW. It is a pictorial visit to HMS Ganges at Falmouth in 1896. 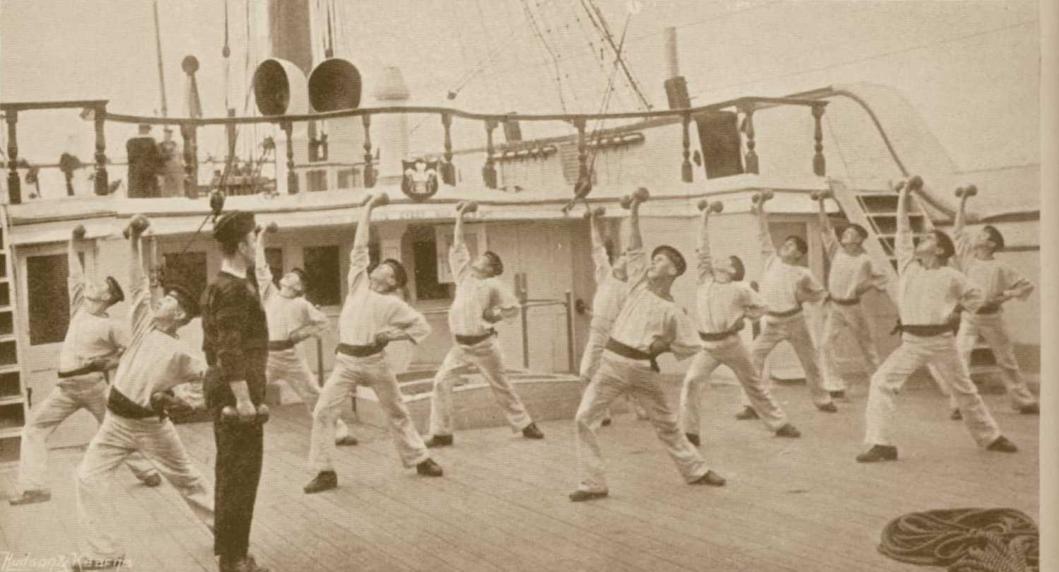 The first shows boys on the upper deck of the Ganges just forward of the poop deck [the one above with the two large circular exhaust vents] exercising with dumbbells with a Royal Marine physical training instructor, and the second 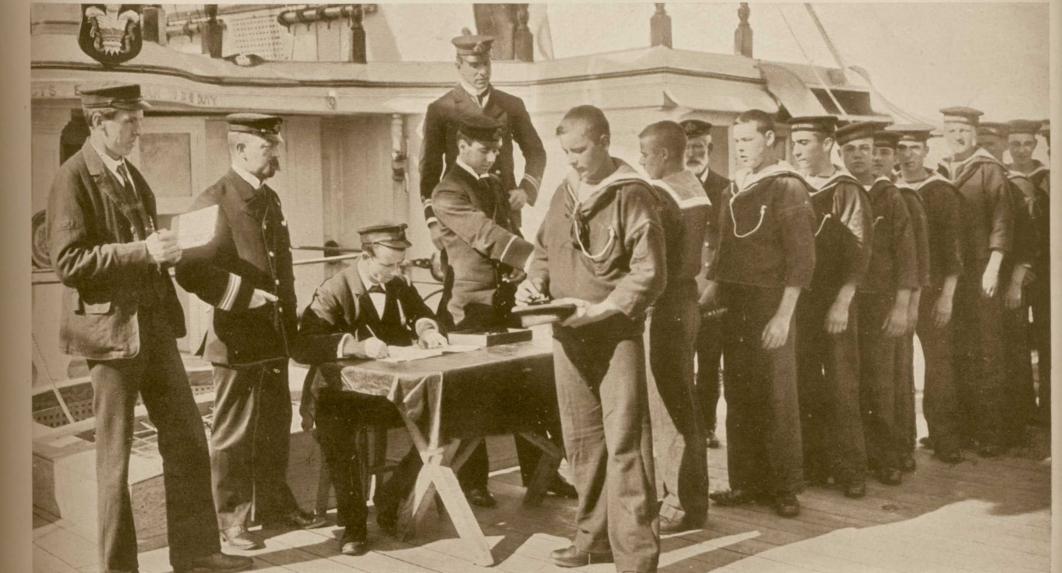 of boys, in those days, being paid their weekly wages, which, for a second class boy was 7 x 6d = 42d = 17½ p in today's money. Just out of interest note the 'paying team' which from left to right are:- a Ships Corporal [RPO] - note his badge

which is the proverbial naval shore patrol armlet namely the letter N then a crown and the letter P, but in this case, that meant Naval Police, and also note his tie: all Naval Policemen, warrant and commissioned officers wore ties and chief petty officers wore neckties.  All petty officers were in square rig at this time. Next comes the Paymaster with white cloth between his stripes and no curl on the top stripe. Then comes the Writer [just that] and a writer was always a chief petty officer - note his necktie. His is followed by the Assistance Paymaster with his white cloth beneath the single non-curl stripe. In the background is the Executive Lieutenant, two stripes with a curl on his top stripe. Finally, a Gunner or a Boatswain [a warrant officer] with white set [a beard].

the reason for me showing you this page is the ships badge and motto.  First the motto.  In the top picture it is not at all clear what the motto is, but it does run under the badge around the base of the poop deck balustrade.  In the second picture you should be able to make some guesses as to what it might be, but if you can't, the third picture reveals most of the motto, which is, ENGLAND EXPECTS EVERYMAN TO DO HIS DUTY.  That, I submit is a far better motto than is Wisdom is Strength although not as subtle.

Returning to the first picture, you will see the Ganges badge sitting above the motto half way across the poop deck balustrade, and at first glance it appears to be a fleur-de-lys, the Prince of Wales' feathers. This is they, 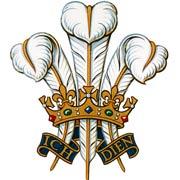 but clearly not the same as the badge.

In the second and third pictures you can see the badge much more clearly although the top piece has been cut off by the 1895 photographer.

Nevertheless, it can clearly be seen that the badge is a bust of a man, a turbaned prince, wearing a beard and a smart exotic garment with an ornate cummerbund, below which the garment culminates in a v-shaped crimping. On top of his shoulders, from the neck area outwards are plumes of feathers and they are resting on the heads of sea horses, each one facing outwards from the mans torso. I am reliably informed by the NMM [none other] that the badge would have been original and probably supplied by the Indian shipbuilder.  The NMM in Mumbai informs me that the Indian prince, the Nawab, the 4th Namwab Sahib Mudhammad Bahdur Khan [II] 1811-1840, a well known, fabulously rich and a brave warrior, was the probable icon, and that the sea horses were symbolic of prowess in and on the sea and self sustainability.  The seahorse, being a hermaphrodite {son of Hermes (Mercury) and Aphrodite (Venus), who, according to the myth, grew together with the nymph Salmacis, while bathing in her fountain, and thus combined male and female characters} represents the sustainability and reproduction of life. In the following picture, there is ample proof that I flunked  my GCE in Art. I have attempted to show you what the badge would  have looked like were the top not cut off in the published magazine. After your hearty laugh, switch your imagination to top gear ! 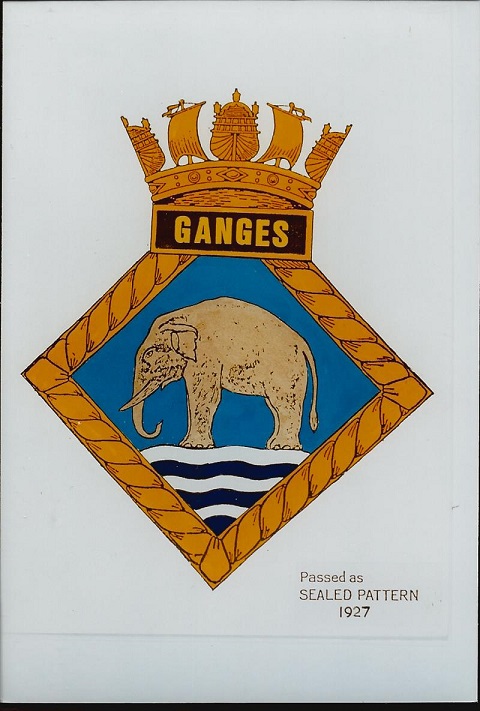 It appears to me that when the Ganges badge was being designed  these pictures were not known about by the Admiralty Adviser on Heraldry, for I have not seen them anywhere save for the commercial magazine.

It begs the question as to why a ship already having a badge and a motto albeit not official for there was no system in being to make it so, should, at the introduction of an official system, have its 106 year old details shunned in favour of a concocted drawing board make-over, as symbolic as it is.

1927 heralded in a new era for the navy and gave work to a new group of men which lasted for many years, and which even today, is a thriving business opportunity though more commercial today than naval. The vast number of ships the navy had commissioned for WW1 was by this time dwindling away, but was still large, and when the Admiralty ordered that each should have an official badge and motto, there was much industry and consulting.  Each commanding officer was tasked to produce a badge and a motto for approval, and once approved the drawing would be sent to the nearest major dockyard where a mould would be carved in wood subsequently to be used to produce the badge. The battleships had large badges and they became smaller in size for smaller ships. Different shapes were used for types of ships and when not a seagoing vessel, a diamond badge denoted a 'stone wall' frigate.  So it was that the commanding officer of HMS Ganges, one Captain William .T.R. Ford Royal Navy and his officers gathered around a table to collectively design a suitable badge and motto.  In the file below I will show you three pictures of the Ganges badge. Each commanding officer submitted his design to the Admiralty Advisor of Heraldry [A.A.H.] who was a man called Charles Ffoulkes.  Captain Ford RN., submitted his rather childish drawing of an elephant to the A.A.H., in late May of 1927, and by the 14th June, he had submitted it to the Admiralty.  Note that it is badge number 363. The Admiralty passed the badge as the "Sealed Pattern" on the 18th November 1927.  Picture two, shows the badge redrawn and this was done at Chatham because the original was now smudged and rather messy. Notice how the childish drawing has been changed although replaced by an equally childish attempt!  The eye of the elephant is now open;  the tusks are smaller in girth though not in length; the colours are different; the shading on the beast much reduced and the ear reduced in size and perspective. The final picture is of the wooden mould made at Chatham Dockyard.  Note the hand written comments. Note also the beauty and skill in this carving and how vastly different it is to the A.A.H. submission and the Admiralty approval copy. It was not used however in the production of the badge because the elephants back touched the name plate.  A new mould was made and HMS Ganges got her first badge in early 1928.

Before I leave this subject of the origins of her name and motto, I found what must be the very first mentioned of the Ganges, at that time still on the drawing board.  The book, The Country Ships 1790-1833 by Anne Bulley ISBN 07 00712364 is really all about ships built in India, at Bombay but also at other places too, and mostly merchant packets for various owners, European included. In this section 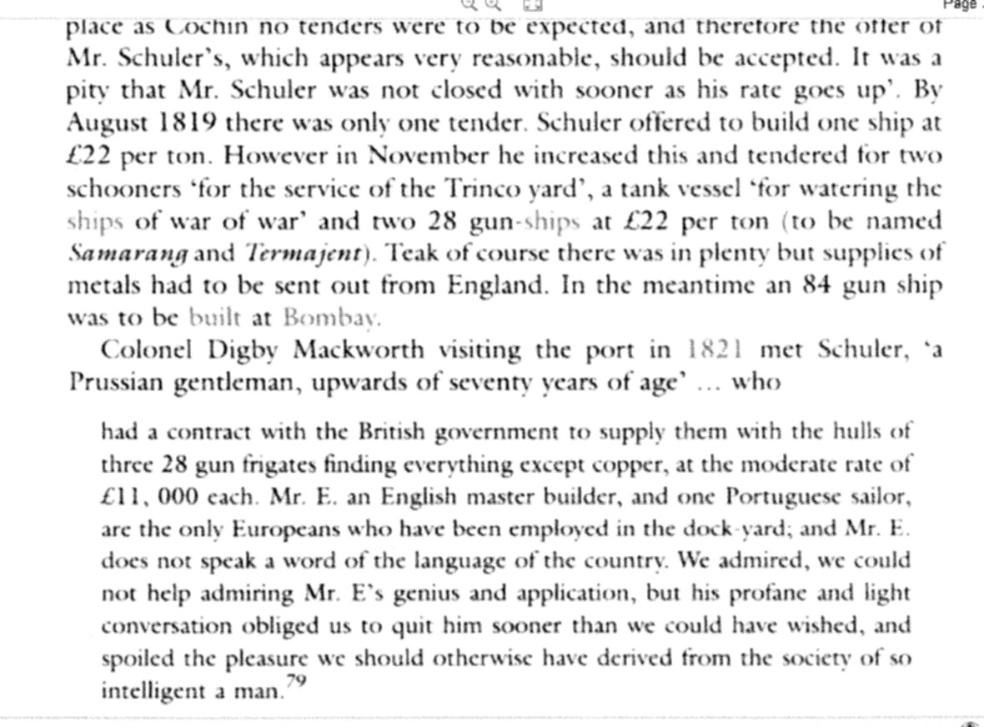 it mentions that " In the meantime an  84 gun ship was to be built at Bombay."  The Ganges, when completed, was approximately 2300 tons.  If we took [just for interest purposes only] £22 per ton, her building cost might have been in the region of £50,000.

The book also mentions that the British Admirals thought highly of the workmanship of the Bombay shipbuilders and states that the man who built all the ships {and thus the Ganges} and who died in 1822, was Jamsetjee Bomanjee.

Next page is SIX