asked the Civil Lord of the Admiralty if he will state the number of rooms in the original accommodation provided for the commanding officer of H.M.S. "Ganges", the Boys' Training Establishment at Shotley, Suffolk, and his family; what is the present use of this accommodation; what is the number of rooms now occupied by the commanding officer at Erwarton Hall; what is the distance of the hall from the establishment; and why, on 5th June, did the Admiralty paid £11,000 for the hall.

Erwarton Hall has been the residence of the captain of H.M.S. "Ganges" since 1905. Until this year it has been occupied under lease. It was purchased on 5th June 1962  to ensure its continued availability as the captain's residence.

The house is two miles from the establishment.

Erwarton Hall was built during the late sixteenth century, and is said to have been one of the first great English country houses to be built in brick. It also has a superb gatehouse, which was built about 100 year after the main building. The hall has strong historical links with Anne Boleyn, King Henry VIII's second wife. The original Tudor mansion was owned by Sir Philip Calthorpe whose wife was Aunt to Ann Boleyn. It is known that Ann spent some of her childhood at the Hall and it is thought likely that Henry VIII visited her there. 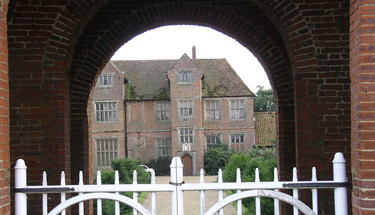 The two wings were demolished by the new owner, Sir Philip Parker, and the materials used to rebuild the main part in 1575. It changed hands again in 1786 to William Berners. The legend of Ann Boleyn’s heart being buried in Erwarton perhaps began when she is reputed to have said shortly before her execution that the happiest days of her life were spent at the Hall. In 1838 a heart-shaped casket containing dust was found buried in the north wall of the beautiful 15th Century St Mary’s Church. The casket was re-buried under the organ. The Hall is in private ownership and not open to the public.

The following picture shows the relationship between three interconnected sites, namely the Captains House, the Married Quarters and the Establishment. My map comes from a recent source and therefore you can see that the village of Shotley Gate has grown to devour the old Annexe Barracks and its grounds/playing fields, whilst the Shotley Marina has now taken over from where the Lower Track used to be, both alterations much reducing the size of HMS Ganges as was. Ratings married quarters were to the left of the B1456 {coloured brown, heading north to Shotley Village proper} and the officers had theirs over to the right of the road.