Much has been written about HMS Mercury over the years and particularly since its closure in 1993.

Above all else, Mercury, with its family [branch and sub branches] atmosphere, its beautiful location and being away from the pressures of sea-time, was a delightful establishment to serve in and to be associated with. The communicators' alma mater holds many happy memories for thousands of people [and I dare say some unhappy ones for a small minority] and the period 1941 to 1993 lives on in our recollections. Its undoubted success as a fleet establishment was wholly due to the personnel who served in it, and here I include everybody, civilians and service personnel alike. There are too many people with diverse personalities to mention, and sadly, many of them are now in a higher place, but given the opportunity, I am sure we would thank them for their contribution towards the previously mentioned success story. In all organisations, success or failure always comes top-down, and we all know that a happy ship has a good commanding officer.  HMS Mercury has been blessed by having twenty five good commanding officers, and since it is they who represent the personnel serving in the establishment, they, collectively, deserve a long overdue salute.  That is the purpose of this simple page. Please join me in that salute.

The table below shows [unless indicated otherwise] the photographs of our commanding officers over the fifty three years the establishment was operational.  Ultimately, each captain will be shown posing for his own 'command' photograph, and that I hope will come about from you, the readers, who may well have the very picture I seek to replace photographs of our captains taken with groups of other people, which is not what I desire nor which you want to see.  Please have a rummage around your archives, and many thanks in anticipation for doing so.

I regret that despite much searching I have been unable to find good quality pictures of all of our captains at Leydene. I publish these as the best option at this time, but if any of my readers has a better picture please tell me and I will do some swaps. I am in touch with Captain Lowe, who tells me that some years ago his house was flooded and he lost many personal effects including his photographs taken when CSS at HMS Mercury.

My huge thanks go to the following people/organisations without whose help this page would have not been possible; I am indebted to you all.

In other researches I found this article in the archives of the IWM when Captain G H Warner DSC {from WW1} RN was the commanding officer of the RN College in Chester, his next appointment after CSS, which took him to the end of WW2.

Divisions, with inspection taken by Captain G H Warner, DSC, RN, Commanding Officer of the Royal Naval College, Eaton Hall, Chester. A military band is playing in the foreground. Note the formal gardens on either side of the men. 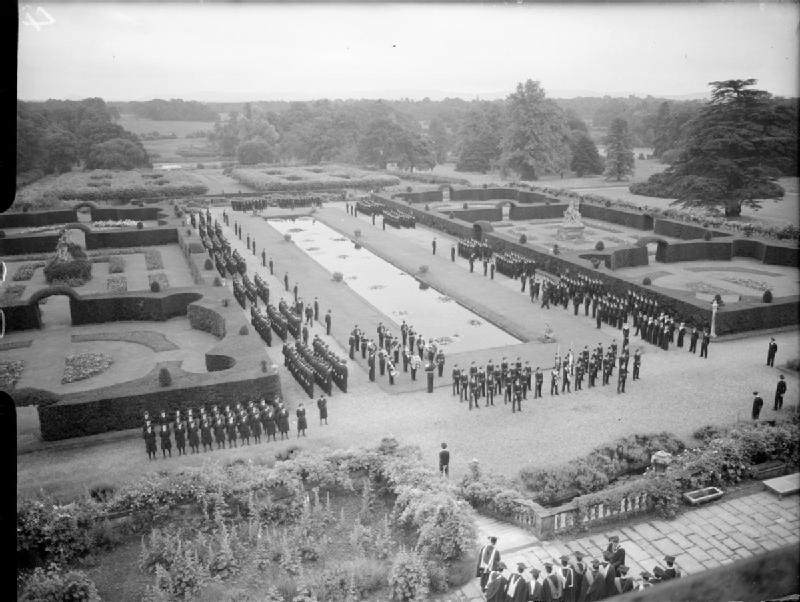 This picture shows Captain John TAIT [right] handing over his Command of HMS Mercury and CSS to Captain David BAILEY on the 6th October 1978.  Captain Tait was a TAS Specialist and Captain Bailey was a Gunnery Specialist.  By this time the die had long been cast, and many senior officers found themselves Commanding "parts" of the navy  out of their specialisation. A good example of this was the appointment in 1967 of Vice Admiral Michael Pollock, a Gunnery Specialist, as FOSM, and at a time when Polaris was being tested and Faslane was being re-built for the nuclear age. Two years later he became Sir Michael Pollock with the award of the KCB.

A typical wintry scene at HMS Mercury.  Captain David Bailey greets Admiral Sir David Williams Commander-in-Chief Portsmouth who has arrived to inspect Divisions of HMS Mercury in February 1979. Thank goodness for the shelter provided by the Drill Shed and the Recreation Centre!

These, to say the least, are wonderful pictures of the Wardroom [Main House] HMS Mercury which compliment and add to my story. They were supplied to me personally by Commodore Anthony MORROW CVO Royal Navy and for the purpose of this web site and web page, the Copyright for them belongs to the Commodore.  Enjoy them certainly, but please do not copy them.  Thank you.

First off, picture one of two of the Leydene House grand staircase, originally owned by Lord and Lady Peel. A must to behold. Stunningly beautiful and shown as a large picture on purpose to do it justice. Whilst the centre iconic part of the wardroom, only officers of lieutenant commander and above could use it as a thoroughfare.  However, it wasn't always the case as this little story, taken from the Communicator Magazine of Easter 1949 clearly shows.

In this picture, notice the 'honour boards' in the passage way on the upper floor and the pictures of officers who had either served in the Establishment or who had been connected with it - the name Lord Louis Mountbatten comes to mind for example.

Next comes two stunning pictures of the Main House complex which at one time housed the wardroom, the sick bay, the dentist, accommodation for WRNS [Stewards], all senior officers offices whether executive or training appointments, lesser offices running the training administration, the pay office, and the Captain's Office [secretarial].  Because the Captain had his  own office in the complex, all requestmen and defaulter musters were also held here. The setting is nothing short of idyllic. Centre stage is the Main House and Wardroom showing the well known and resplendent rose garden and the patio which led down to it from the Wardroom.  The mast and ceremonial pond [or pool] is clearly visible and over to the left, under the part of the building clad in ivy, is the fire suction point, the STATIC WATER TANK. Before the swimming pool was built in front of Mountbatten Block, this [painted blue] tank was used in the afternoons [sunny ones that is] for females and backward swimmers [both genders] and in the dogs for males.  These pictures were taken in the summer of 1958.

Note in the picture above [taken in the dogs] two very large masts. Well the one at the back [to your right] stopped a low flying private small plane in its tracks and of course prematurely brought it down to earth. This was on Friday 25th July 1958, when a Tiger-Moth [callsign G-AMHI] en route to the Isle of Wight was in collision killing the aircraft's passenger, one Brian Shersby.   HMS Mercury's fire and emergency party were the first on the scene. The other mast was taken down as a precaution.  The only mast in Mercury that the majority will remember, was at the top of the steps leading from the front entrance to Mountbatten Block up to Droxford Road, opposite the Post Office, itself an integral part of the Supply Block which replaced the buildings used for the New Entry Division.  This mast was directly associated with the ICS Wing part of Dreadnought Block onto which wire MF and  HF broadband aerials were mounted.  Over the top of the trees [looking north] are the fields of the Meon Valley with the tiny village of East Meon nestling in the folds of the valley below and off screen. The two green roofed Nissan huts you see upper middle left form the Establishment Church.  Virtually all of the buildings beyond it are owned and used by the PSA or the DOE civilians on site, except that somewhere in that lot is an indoor .22 shooting range.

Here is a good close-up of the patio I mentioned above. I can just imagine stepping out of that open double door with a good stiff G&T going off to smell the Roses, which Arthur, the head gardener, for so many years lovingly tended.  In the Summer months being in and working in Mercury was a joy, but in the Winter months, well, let's just say it wasn't as good. Note in this picture the white post on the grass and shrub bank [which is a loudspeaker in disguise]. Well just in front of it and to its right is the saluting dais, used throughout the week either for New Entry Divisions or less frequently for Ship's Company Ceremonial Divisions.  The parade commander stood on the dais, forward of the steps leading to the mast, adjacent to the pool/pond. I'll wager that the lone sunbather got a shock when this photographing helicopter hove into sight.  Can you spot her? Look to the second block, to above the two sets of wide white doors to the verandah above, left hand edge. The only other living person in sight is the RPO stopping vehicles which might upset the Commander: he is framed between two conifer trees on the top road. This little snippet tells of the progress made in the Wardroom Mess.

Finally in Note 12, two pictures of groups taken at a time when Commodore MORROW was the CSS at HMS Mercury and a text snippet.

Note 13.   An interesting article about the origin of the appointment of Flag Lieutenant. Click on this link SIGNAL OFFICER - FLAG LIEUTENANT.pdf

See also this page http://www.godfreydykes.info/JUST_A_BIT_ABOUT_RN_COMMUNICATORS_AND_THEIR_THINGS_PART_TWO.htm - re the Captain's House at Leydene, by scrolling down to Story Line 138. This is also an interesting page because it shows the full staff of the Signal School at Portsmouth before its move, and also the full staff at Leydene on commissioning HMS Mercury HMS_MERCURY_AND_THE_STAFF_OF_THE_SIGNAL_SCHOOL.  OF GREAT INTEREST TO COMMUNICATORS IS THIS PAGE ROYAL NAVAL AND BRITISH MARITIME SNIPPETS 2 browsing from Section 14 onwards.

Rear Admiral R.N. Woodward was the last FORY. He was succeeded by Commodore A.J.C. Morrow Royal Navy who was the only officer to hold the title of Commodore Royal Yachts [CORY] before HMY Britannia paid off. DCI RN 83/95 refers. He had the sad task of bringing Britannia home to Portsmouth dockyard [South Railway Jetty] for the last time, escorted by the destroyer Southampton. He rang down "finished with main engines" at 1135 on the 22nd November 1997 to end Britannia's forty four year fabulous career. She had steamed 1,087,623 miles. Nineteen days later, the Britannia paid off in the presence of HM The Queen who was piped ashore at 1500, no doubt feeling very low and thoroughly disappointed. Early that day, the media caught HM wiping away a tear from her eye, and given that Royalty never show their emotions in public and keep the stiff upper lip, that equates to floods of tears: our hearts, minds and emotions were fully with Her on that sad sad day.

Note 16.  From the Navy List of late 1939, I have taken the Staff of the Signal School in RNB Portsmouth