The following pictures show a barrel which is made from the teak of the old wooden ship HMS Ganges.

HMS Ganges had sailed from the harbour in Falmouth, Cornwall, where it had been for many years as a boys' training vessel, to an anchorage in Harwich, Essex.  She was anchored off Shotley Point from 1899 until 1906.  In 1905 the boy trainees came ashore to establish RNTE Shotley, which later became HMS Ganges, colloquially known as a 'stonewall frigate'.

In June 1906, this proud ship lost her famous name, and became HMS Temedos III.  Early in July of 1906, this old ship sailed out away from Harwich enroute to Chatham, Kent.  She became part of the Establishment [HMS Temedos] - part of the RN Barrack complex - whose task was to train boy artificers.

In 1930, the old original HMS Ganges was broken up at the Fish Quay in Devonport, Devon having been towed back to the West Country port.

Well, that's one version of it, and in a minute I will give you another. The difference in the 'tales' is just a trifle more than petty, but I will leave you to judge who is right and who is wrong. In the meantime, because there could be an element of bullshit here, I have made a little gif for you to ponder upon.  Clearly, I needed an animal to produce the excrement and since the dog I mention below was pee-ing at the time, the next animal available was, guess what, an elephant, so I used it? Have a look at this and please, don't be too critical.  GANGES BULLSHIT.htm

HMS Ganges was the last wooden-hulled vessel to carry an admiral and to act as his flagship.  The plaque clearly shows that. 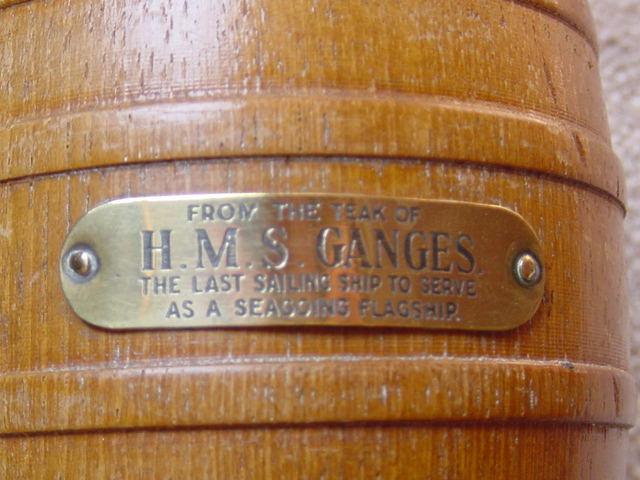 This is NOT a thumbnail.

nor are these three below. 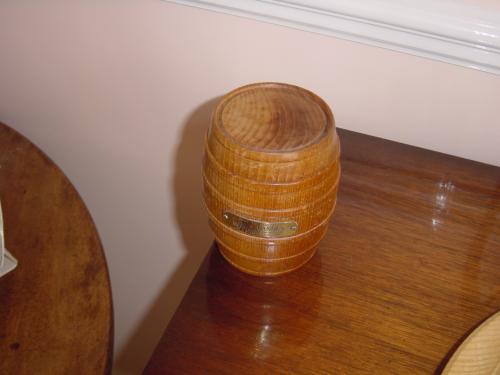 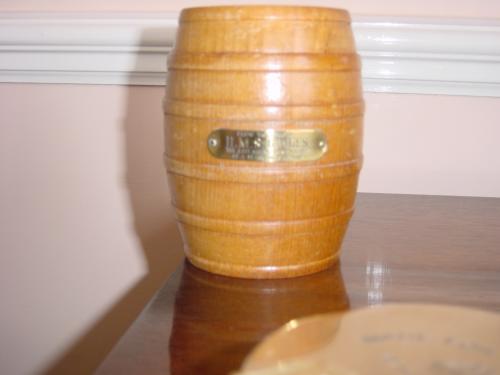 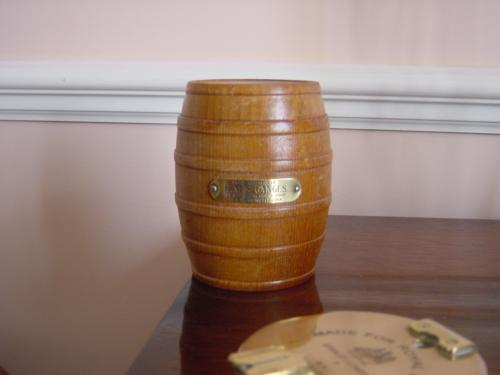 There are many of these barrels around, but for those of you who haven't seen one or don't have the pleasure in owning one, I thought you would like to see the Ganges Barrel.  I am also reliably informed [by Dickie Doyle the man @ SLOPS wearing a  Ganges Association hat] that the barrels turn-up all over the place, sell for approximately £30GBP, but few seem to have their little lids.  There are other pieces of artefact said to be made from Ganges' old teak timbers, ranging from garden chairs, to lockers, to pieces of household furniture, not to mention the whole of the captains cabin which now, as a snug, graces a west country hotel.  I bought my barrel whilst cruising on the Cunarder QE2 recently.  It is brand new, has its lid and its brass plaque and I am rather proud of it.  On first hearing the barrels exchange hands for £30GBP, I had that feeling prevalent amongst dogs [not bitches], but on reflection and thinking about those most enjoyable antique road shows on television, doesn't that old lady's vase, which is worth £1000 GBP, ALWAYS seem to be cracked or chipped, or just the one remaining from a set of twenty which would have been worth a fortune, but all it is worth now is £10 GBP ?  - poor old dear !  Thus, my pristine, brand new and super smelling barrel [with the brand new lid lifted off] CLEARLY [as the Cunard bloody outright robbers said] is worth much more than the tat one finds at car boot sales and in pseudo antique shops more suitably called junk shops. Moreover, unless I am eligible for a grant from the Ganges Distress Fund, I will not reveal how much I paid for my barrel.

The internet as you will know, has all kinds of wonderful stories, many of them covering the same or similar stories and they therefore act as counter-balances:  one should read at least a couple of versions of each subject where and if possible.  This one from WIKIPEDIA [I love that name - dont know why] is worth reading.  It goes

From Wikipedia, the free encyclopedia

HMS Ganges was an 84-gun 2nd rate of the Royal Navy launched on November 10, 1821 at Bombay Dockyard. She is notable for being the last sailing ship of the Navy to serve as a flagship, and was the second ship to have borne the name.

Admiralty orders of June 5th 1816 directed her to be built as a facsimile of HMS Canopus (the ex-French ship Franklin, which had fought at the Battle of the Nile). Building began in May 1819, under the direction of master shipbuilder Jamsetjee Bomanjee Wadia. She was constructed from teak, with a length of 196 ft (59.7 m), and breadth of 52 ft (15.8 m). She had a ships company of 800.

She was commissioned at Portsmouth in 1823, and served in several locations over the following decades. Notable events included a period as flagship of the South America Station for three years, during which she landed Royal Marines in Rio de Janeiro after a mutiny by Brazilian soldiers. She also saw action in the Mediterranean in 1838—40, bombarding Beirut and blockading Alexandria. She was paid off during the Crimean War, and saw no action.

From 1857—61, she was the flagship of the Pacific Squadron, based in Vancouver, after which she returned to be converted into a training ship; she began service as a training ship in 1865 at Falmouth; in 1899, she was moved to Harwich.

In 1906, she was renamed HMS Tenedos III, then moved to Devonport to become part of the HMS Indus training establishment; on August 13th, 1910, she was renamed HMS Indus V. In October 1922, she was renamed as HMS Impregnable III and transferred to the HMS Impregnable training establishment, also at Devonport, once again training boys. In 1925, she was finally taken out of service and transferred to the dockyard, and in 1929 she was sold for breaking up. In 1930, after over a century in service, she was finally broken up at Plymouth. The captain's cabin in the stern was used in the construction of the art-deco hotel on Burgh Island in Devon, where it still remains to this day."

Different eh?  Especially the last paragraph, and fancy it coming a full circle from boys' training to boys' training and under four different names.  Apart from not being 100% sure that the barrel [etc] came from the wood of the Bombay HMS Ganges,  for there were a couple of ships called that at Harwich at the turn of the 19th to 20th century and they were all broken-up too, why did a ship in 1930 which had not been called Ganges for approximately 25 years, shoot to the top of the popularity list circumventing the illustrious names of the Impregnable, the Indus and the Tenedos.  Apart from Ganges' former connection with Falmouth, I don't think that Plymouth men [the breakers] would have cared too much about its Cornish connection because it would be known to all in dear old Guzz as the Impregnable.  That apart, I have another thought which worries me!  RNTE Shotley didn't become HMS Ganges [our alma mater] until 1927 and HMS Ganges proper at that time was HMS Impregnable III in Devonport albeit out of service. Here we need to ask ourselves what is in a name? In 1925, say, two boy's joining the navy one at Devonport and one at Shotley BOTH joined HMS Ganges, that is, in ALL BUT NAME !  Worth a thought at least.

Keep the shaggy dog stories going - it adds to the naval spice of life!