Today, it is easy to forget that the East of England, and in particular Eastern Suffolk, had a major rat infestation for many years culminating with the outburst of the dreaded bubonic and pneumonic plague.  It is even more difficult to accept that as late as 1911, Shotley had several villagers died from the plague and a seaman suffering also from the plague was isolated in the Royal Naval Sick Quarters at HMS Ganges under strict isolation.  This sailor, referred to only as 'Mr B' in medical journals survived his plague attack although it denied him his eye sight and he died when he was 76.   It is also widely accepted that a few years before in 1906, several HMS Ganges boys died from a suspicious form of pneumonia which by 1911 was thought to have been the plague also.  All these 1906 dead boys are buried in St Mary churchyard in the naval/military section.

For reasons unknown, the naval records on these matters are vague and non commital.  However, since the 1911 Shotley plague caused so much concern throughout the county and the deaths so shocked the community on the peninsular, that the national Government and newspapers got involved and published stories which outline the facts to us today.  The following stories come from The Times newspaper, and my story starts with an article dated 4th July 1911. 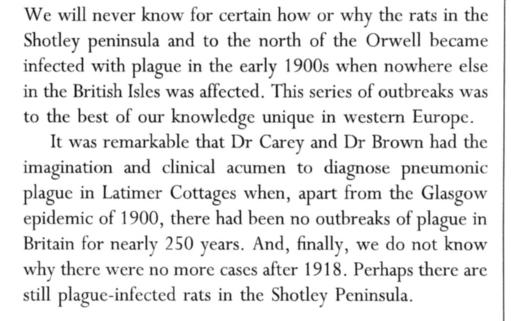 The following academic paper was published in 2000 and deals with the plague in the Shotley peninsular and in HMS Ganges.

The plague and HMS Ganges.pdf

Then, for further reading there is this from Cambridge University. http://journals.cambridge.org/action/displayAbstract?fromPage=online&aid=3226880
A book, 'A history of the plague in the British Isles' by J.F.D. Shrewsbury Cambridge University Press in which the author actually claim a death at Shotley Barracks from the plague.