Reason one concerns the Establishment's Badge or Crest.

The badge is as WRONG today [see the RNCCA website for example, the banner-carrier of the old School] as it was when it was first commissioned in January 1942, some many months after the Signal School was relocated to the Meon Valley from the Portsmouth Naval Barracks/Dockyard in 1941 - [it had a foot in both camps !]

Well ALL shore establishments badges SHOULD BE surrounded by a DIAMOND SHAPE whereas, ALL ships are surrounded by a CIRCLE.  Somewhere along the line, somebody cocked things up, which is surprising given that ships crests/badges had been going since first established in 1919.

Despite what you might read on website selling ships badges [and there are several of them] this is the official line.

Ships [sea going vessels] used to have shaped badges to reflect the type of ship which were as follows; Battleships/Battlecruisers CIRCULAR, Carriers/Submarines DIAMOND, Cruisers PENTAGONAL and all others a SHIELD.  Because sea going vessels travelled the world,  the Admiralty ordered that as from the earliest days of WW2 [1940] their 'types' needed to be masked from enemy agents in various foreign ports, and so ordered that all sea going ships should have a CIRCULAR badge. That order has never been revoked !  However, this security measure did not affect HM Shore Establishments and to differentiate them from ship's, they were simultaneously given DIAMOND shaped badges. The official Admiralty Authority on ship's badges [the SNBC] admits that there were several breaches of this Order, ship and shore, and even though they were [and are] official bonafide badges, they were wrongly approved for use post 1940. Shown here in this file, is a letter I received from the SNBC which mentions the point discussed via other means.  I have deleted my address and the originators signature for security reasons. 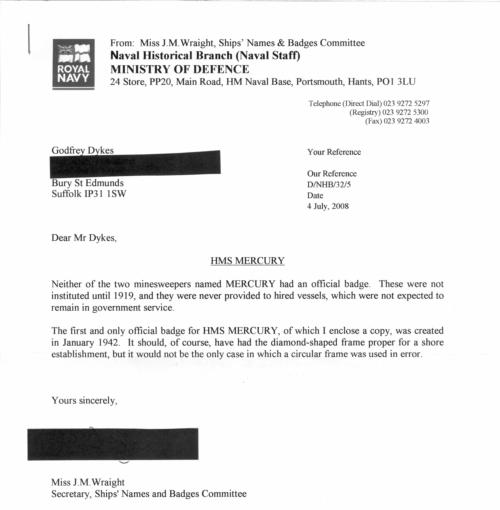 The subject of ships badges is emotive and volatile, but notwithstanding the associated nostalgia, the long and the short of the matter is ships CIRCULAR and shore establishment DIAMOND.

Wooden ships of the Royal Navy had elaborate figureheads often reflecting the name of the vessel. Steel warships did not have figureheads and a need for ships' badges arose. Initially these were unregulated designs. During the First World War the Commanding Officer of the new destroyer H.M.S. Tower asked Major C.J. ffoulkes (1868-1947), then Curator and subsequently Master of the Tower Armouries to design a badge. He was subsequently requested to design others and the Admiralty Board set up a Ships' Badges Committee in 1918 to regulate ships' badges with Major ffoulkes as the first Adviser on Heraldry.

Since 1934 when Sir Arthur Cochrane * (1872-1954 and his signature is shown on the crest below), Clarenceux King of Arms was appointed Adviser on Naval Badges in succession to Major ffoulkes the post has been held by an officer of the College of Arms. The responsibility of the Adviser is to attend meetings of the Ship' Names and Badges Committee and to produce designs for naval badges which are of different shapes depending on the type of ship or naval establishment.

This is the original badge approved in January 1942. 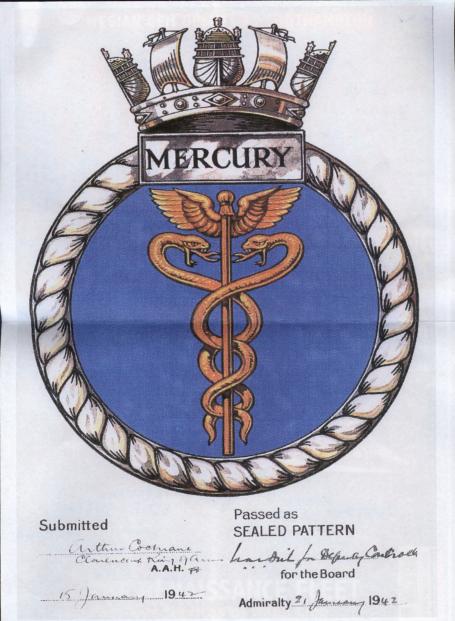