HMS MERCURY and the staff of the Signal School

The story of the Royal Naval signal school is well known and I am not about to insult your intelligence by going over old ground.  I myself have a couple of pages on this site about the subject, and countless other pages abound in the public domain. If you have missed any of my pages, have a peep here:

2. THE STORY OF HMS MERCURY.htm

3. The Court Martial of the C.O. of HMS MERCURY.htm

What I intend to show here is the transition of the School from Portsmouth to Leydene in terms of Staff Personnel, and I don't think that has been done before.

By 18th May 1941, the records show HMS Mercury, the minesweeper and her officers. See this file.

Two months later in mid July 1941, the sweeper was still extant even though it sank on Christmas Day 1940 - see this page for details The Court Martial of the C.O. of HMS MERCURY.htm  A further two months later in mid September 1941 all things changed, and although a few names changed the format carried over into mid October. It then changed to this shown over three pages:- By November '41, the format changed as shown on the following three files. Note for the first time the mention of an acting appointment for the command of Mercury viz. B.R. WILLETT. This is followed by the officers of the minesweeper HMS Mercury and then the appointments to the new H.M. Signal School [un-named].  That is followed by the staff for Mercury II: I have chosen to ignore the civilian staff which is rather larger than the naval staff. 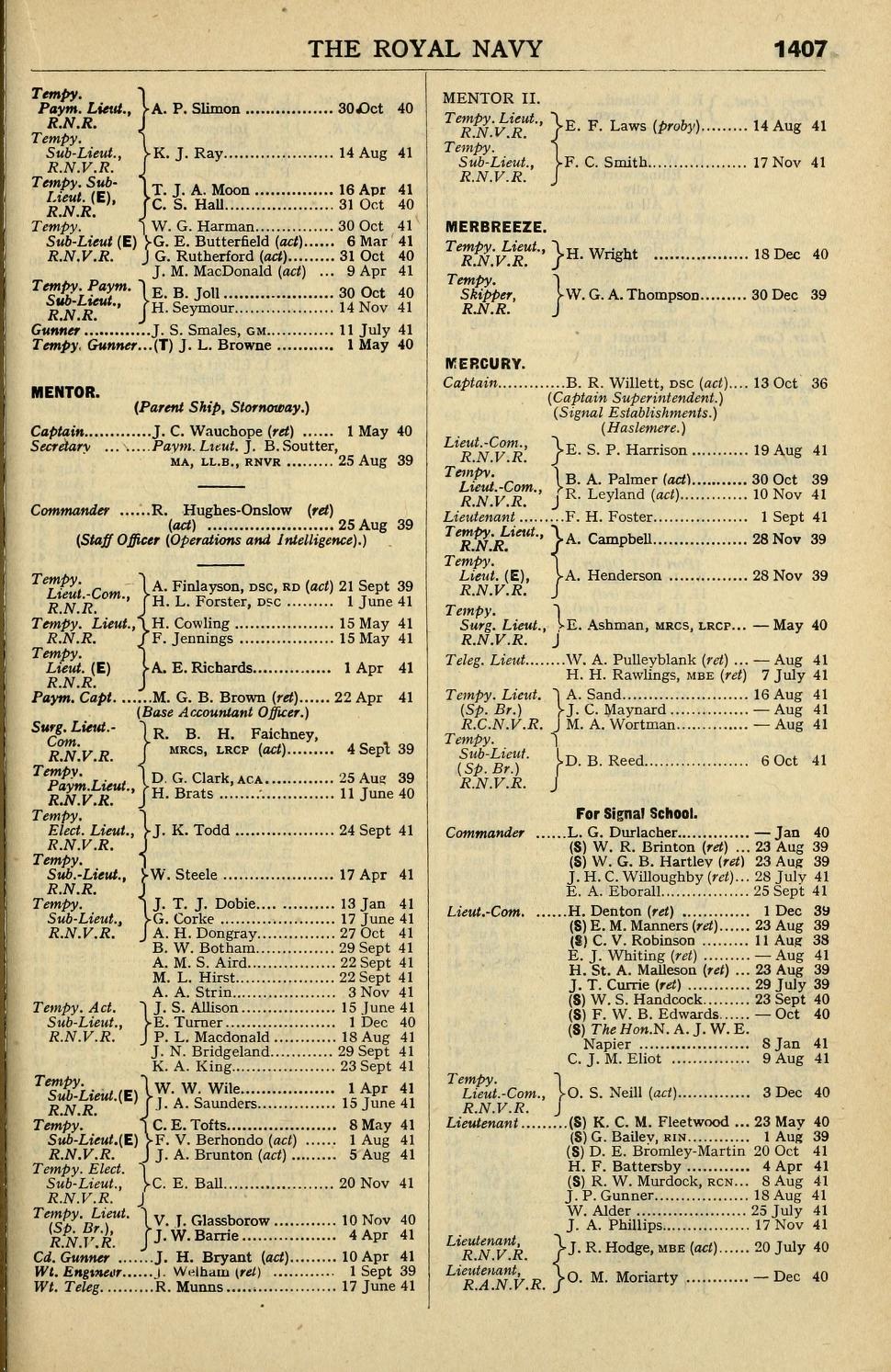 Finally, and for the first time HMS Mercury has come into its own which is first documented in the Navy List in mid January 1942, as shown below:- 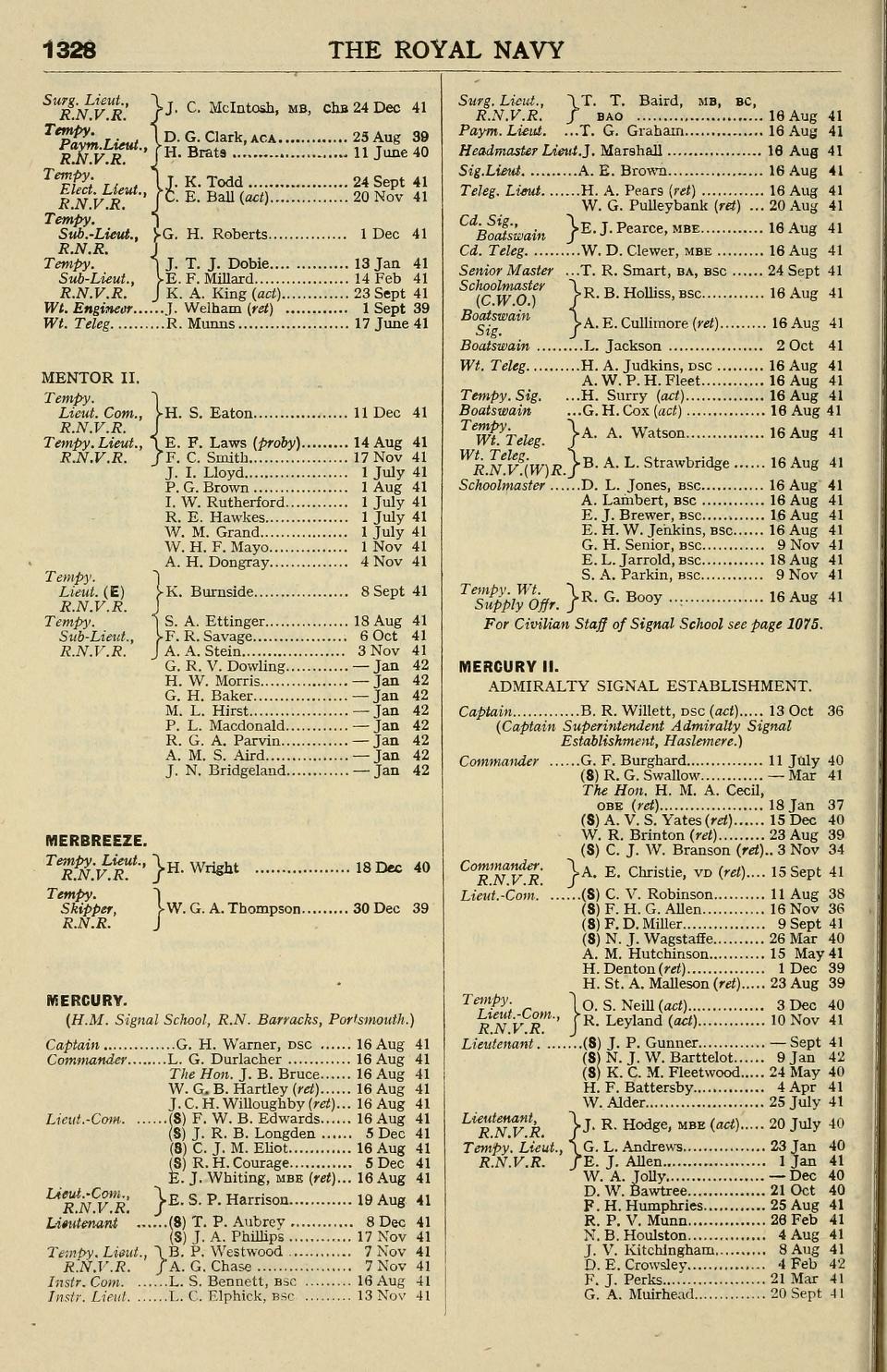 HMS Mercury II, this time Commanded by a Captain RN, was the experimental side of the Portsmouth Signal School which established itself at Haslemere and became known as ASE [Admiralty Signals Establishment]. The plate above [under Mercury II] shows the service personnel of ASE.

By  March 1942 the original Signal School at Portsmouth was now functioning in HMS Mercury at Leydene [this time with a senior Captain in Command] and ASE at Haslemere now commanded by the erstwhile commanding officer of Leydene-in-the-build.

To assist you if you are interested in detail, the abbreviations used are decoded below. However better still, and for a more profound understanding of naval ranks and rates before the watershed of 1949 which saw the end of the warrant officer rank, you would be better placed were you to read the Warrant Officer files on this site starting on this page  The story of the RN Warrant Officer.htm

Just as a one off, in May 1945 {four plates below}, at the end of WW2 in Europe, HMS Mercury's management seemed to be odd and a little top heavy! Note that the Commanding Officer appears to have an Acting Captain {retired} and an Acting Commander {retired} helping out {Yates/Kitson respectively}, these in addition to the active-list Commander [himself a future Captain of HMS Mercury] and all the normal and expected professional Signal Officers, etc. Note also in the list Lt Cdr JRB Longden another future Captain of HMS Mercury.