MALTA and all 'Comms together

Those many of you who served ashore in Malta will/may remember any one of these shore establishment.

This animated gif was created by Jeff Dykes for the Malta Lascaris Association but rejected when the Association abandoned its website in favour of Social Media Facebook page. It says copyright of the Lascaris Association webmaster but ignore that as I can't be bothered to rejig my gif post rejection: there is no website and I am not certain as to whether there is still an Association!   It is possible [though rare] that upon opening this page you can catch the gif half way through its cycle, so if you were expecting to see a name and didn't,  do let it continue its run until you do see it!

Story continues just a little bit down the page.

When you have finished your wander down memory lane we can start the next part of the page.

For the majority of RN Communicators in living memory, Lascaris Signal Station/Commcen immediately above Customs House Steps on Grand Harbour comes to mind,  and with fond memories of happy days when ratings, male and female wore the Commander in Chief cap tally. However there was much more to a Malta draft than just Lascaris, and remember that in the 1950's and increasingly so, the vast majority of personnel were accommodated on the St Angelo side of the harbour with it and Ricasoli [and less so RNH Bighi] taking the strain.

For the purposes of this page we are going to concentrate on other areas and stations which employed sparkers from pre WW1 times right up to the post WW2 period, thereafter employing only greenies of REM types. These drafts were to the two main radio stations of Rinella just behind Ricasoli who transmitted fleet broadcasts to ships at sea and played host to ships using ship shore to send their traffic to the Island for the C-in-C and his staff or for onward delivery to the UK, generally.  Rinella, as in all cases for shore radio stations, had its high power transmitting aerials well divorced from those of a sister receiving station, and for Malta this was Zebbug with its own receiving aerials.  Here's a little map to guide you to the two establishments. 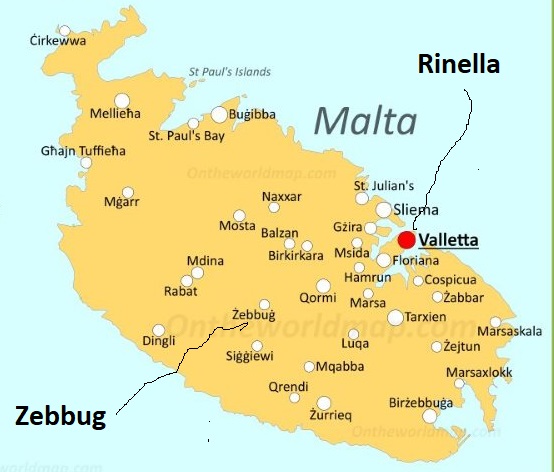 Next a series of pictures taken at various times. Where names are known they have been added just in case anybody recognises themselves or relatives recognise a love one. 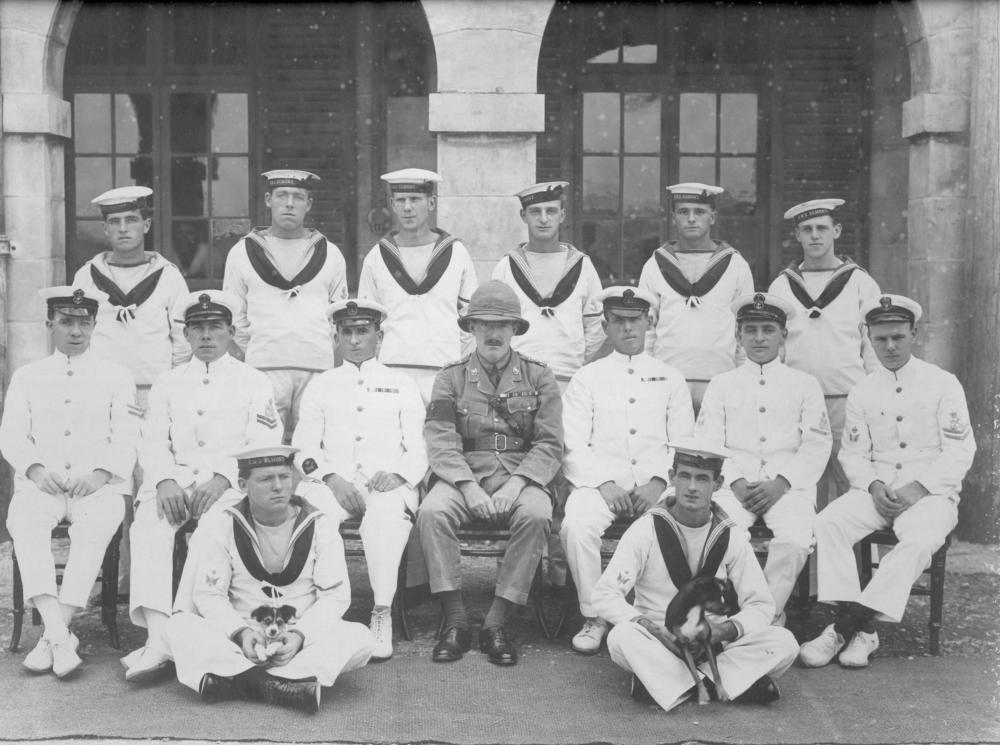 No names to reveal. However note the Sparkers badges and the cap tallies say HMS EGMONT the former name of HMS St Angelo. The arm band worn on the officers right sleeve is not one of mourning but of regimental style. Note the two dogs - common on such photographs. The medal bars worn by the two CPO's and the RM officer would have been associated with the Second Boer War or the 1900 Opium War. Note the Sparkers badge on the right cuff on the left of centre CPO. Also note the black socks on the PO right of centre. 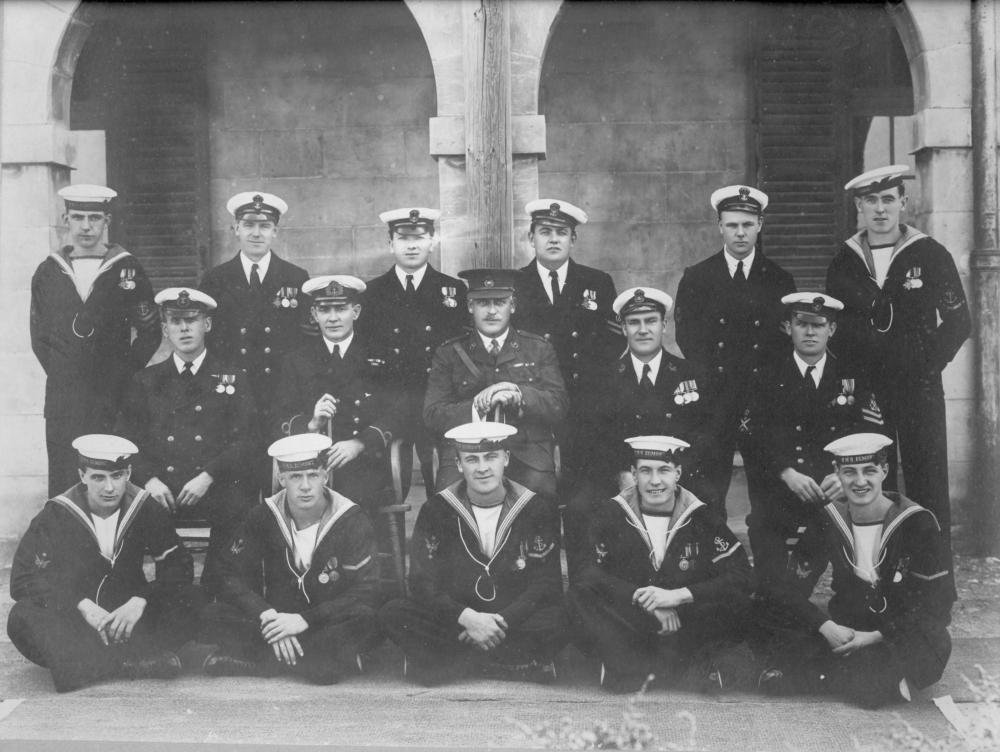 The medals worn will have been earned during WW1, or from the Chinese opium war of 1900 or from the second Boer War!  Those of you who knew the signal officer  Commander Alan Colmer RN would seen an almost double in the face of the officer sitting middle row second from left.  The OIC is a Royal Marine officer.   On the left of the CPO Telegraphist is a PO - note his crossed torpedoes badge. The Torpedo branch were the forerunners of the radio electrician branch and did all the equipment maintenance and defect repairs so he is an embryonic Greenie. The OIC is a Royal Marine officer. 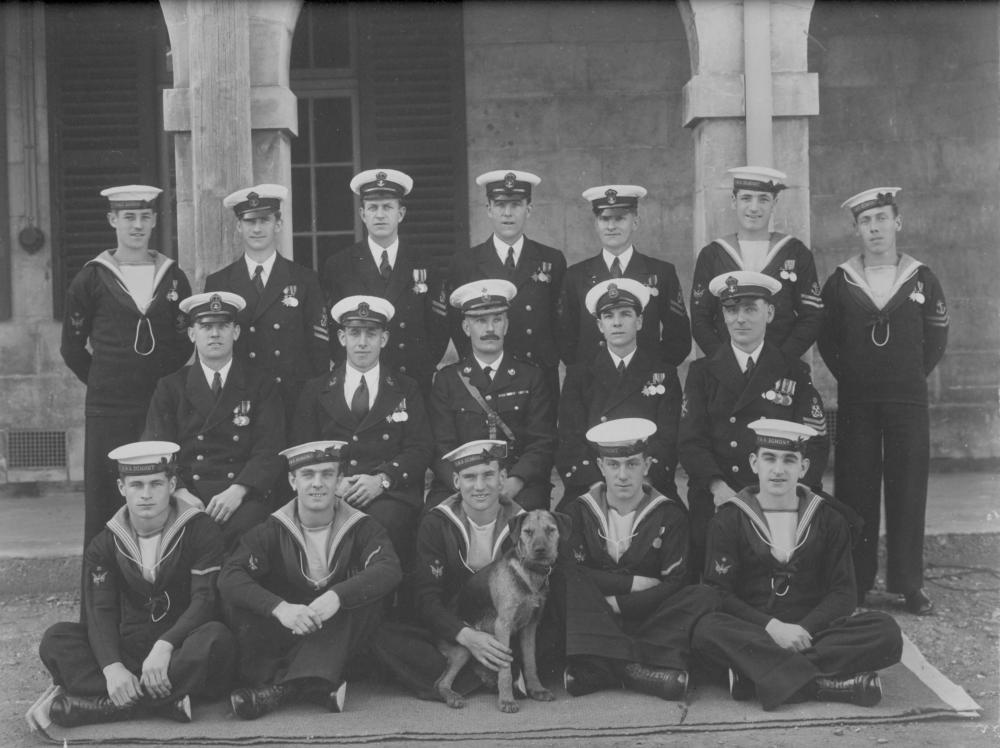 1919 TO 1922, Royal Marine OIC with Greenies and Sparkers. Note the three types of CPO [See my Warrant Officer pages] Centre on left a CPO with two buttons on the rear of his cuffs; the CPO Telegraphist and the CPO Artificer. HMS Egmont soon to be changed to HMS St Angelo. 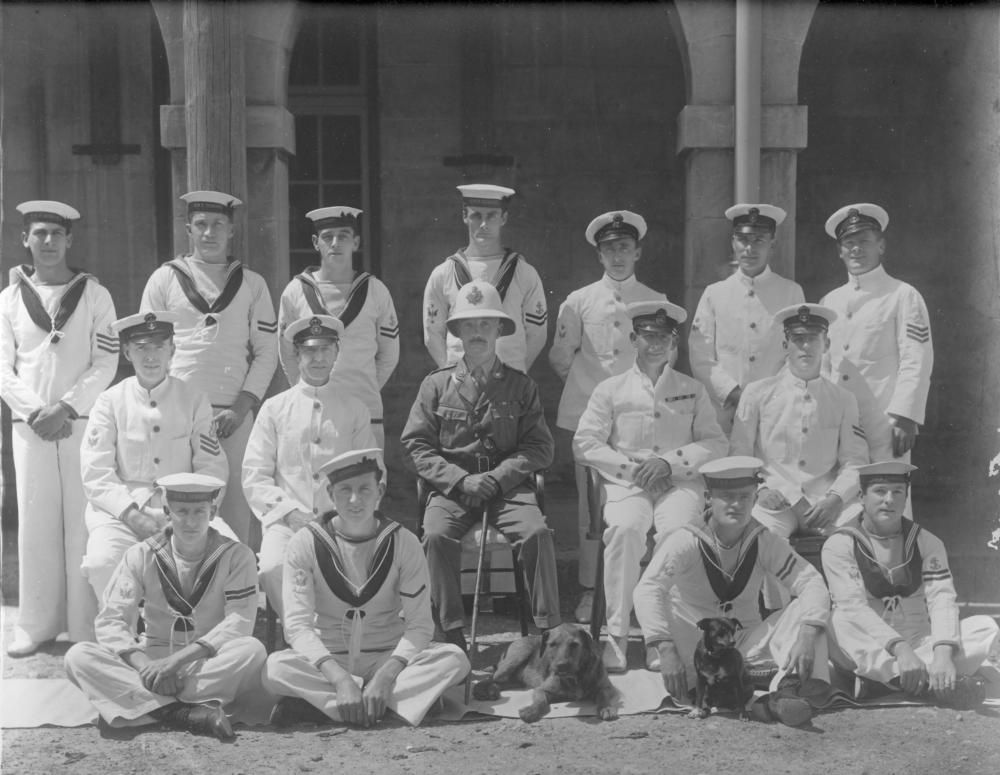 HMS EGMONT. Taken before the days of photographic smartness. A scruffy looking lot to say the least even to the CPO to the left of the RM OIC having his ice cream suit collar open. 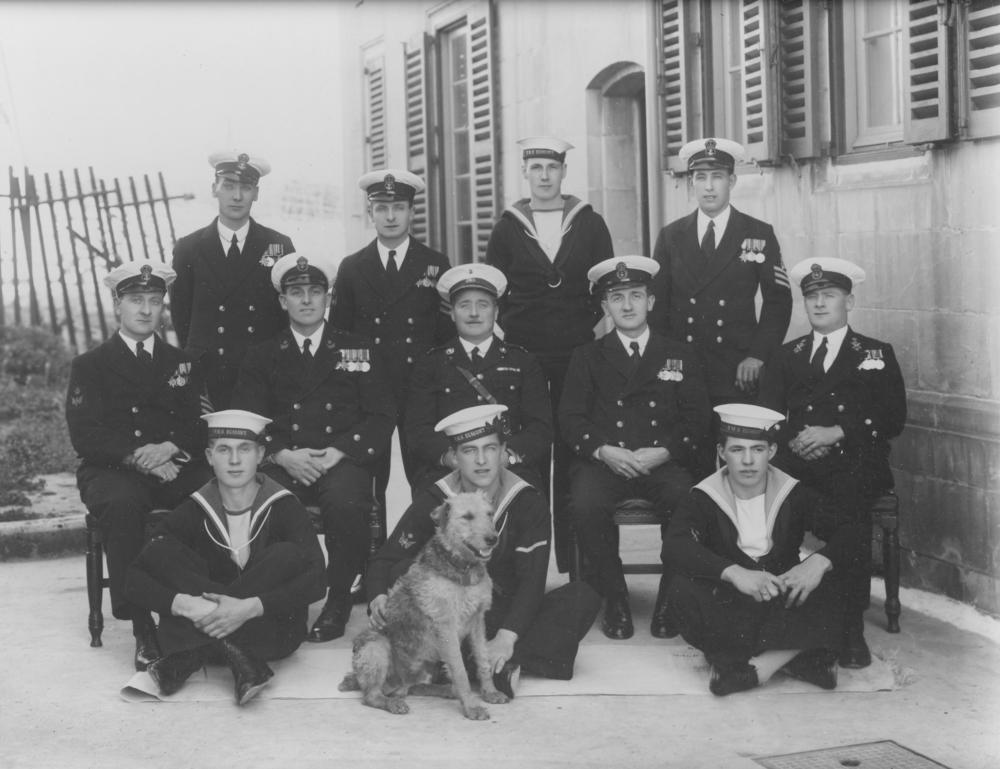 Again the combination of a Royal Marine officer, a Chief Tel and a REA1 or a CREA. The badge on the lapels of the CPO impossible to see but it is the badge of the torpedo branch [note not a torpedo coxswain] which were the maintainers for all W/T equipments etc and pre dated the REM branch and its forebears. HMS EGMONT. Sparkers and Greenies [note crossed torpedo badges] with RM OIC and of course the COMMCEN dog - Malta dog, at that!Malta dog was the name in the Mediterranean for severe diarrhea and stomach upsets! Note the white socks worn by the sailor front right. Pity about the broken fence. 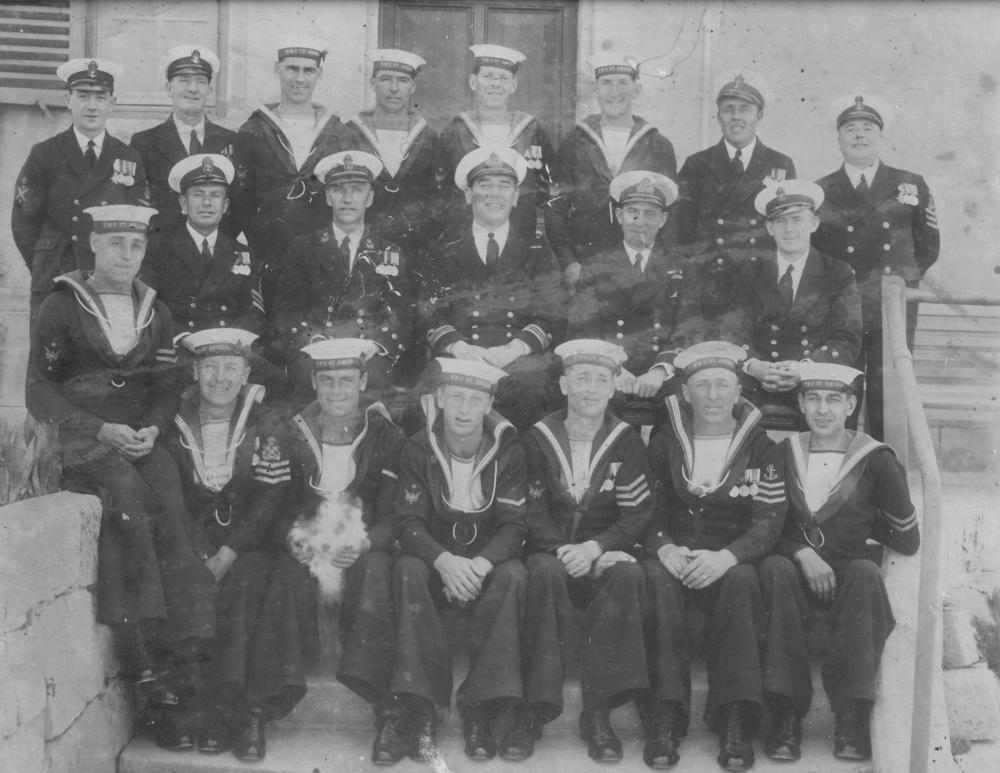 A photograph which has not worn well! Notice now [in 1932] the HMS St Angelo cap tally. A goodly mix of characters here - the three badge nothing, the three badge killick and the three badge Acting PO [1 year in square rig before being confirmed and changing into fore and aft rig]. The dog is a bit blurred. Greenies and Sparkers. The Chiefs are a Sparker and a Tiffy. It must have been windy and the extreme right hand man front row is holding down in collar with his left hand - he is not scratching his back. 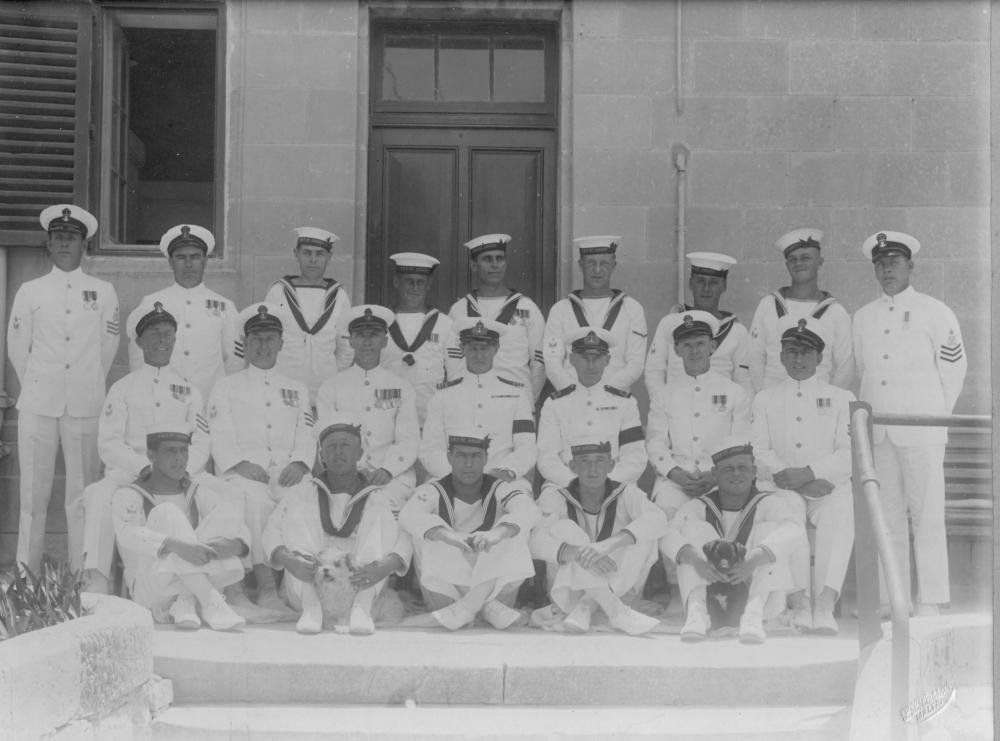 'The 1934-1936 staff of Sparkers and Greenies, but because of the mourning arm bands worn by the Commissioned Officers, the time would have been early 1936. King George V died aged 70 at a time when court mourning would have lasted several weeks. HMS St Angelo. 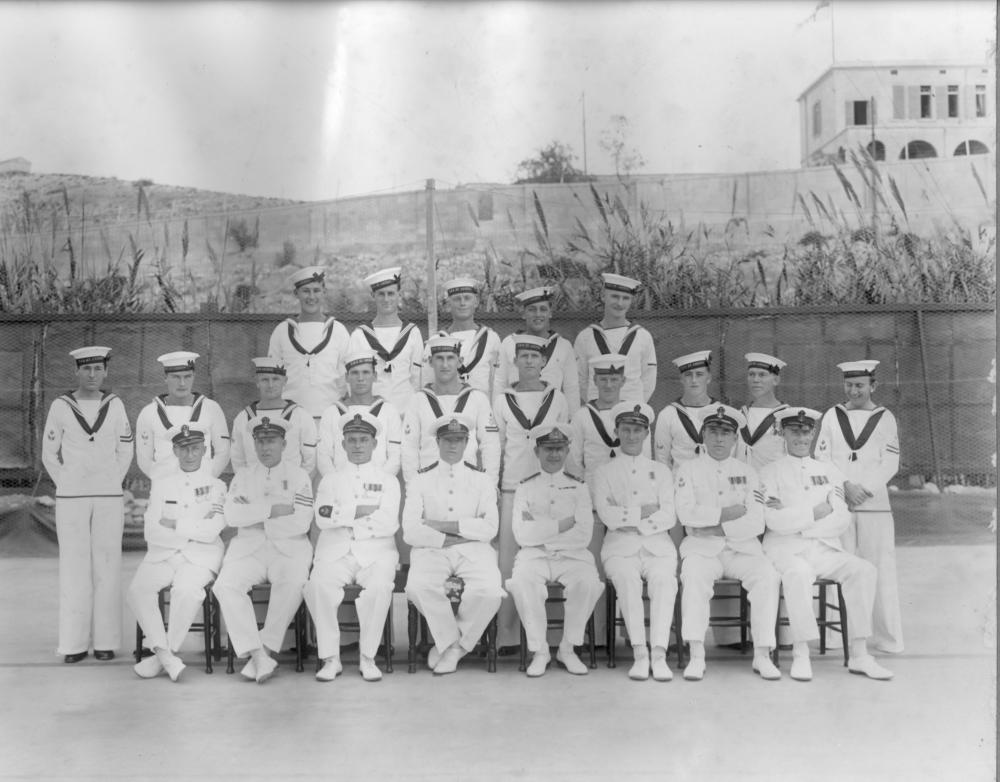 The last picture of sparkers in either Rinella of Zebbug, as WW2 started in the Autumn of 1939, until we see them again in 1947/8 pictures. Lots of PO Telegraphists. How many? At least six - middle row extreme ends and one in centre 5th from left all doing acting time before changing rigs to fore and aft, and three seated. The two PO's right hand side one seated one standing appear to be sharing a private joke. Note the CPO Telegraphist wearing his badge on his right cuff. There is one Greenie CPO Artificer and one PO. The OIC is now a Lieutenant [instead of a Lieutenant Commander] but the Senior Commissioned Warrant Officer was still a staff appointee. [Warrant officers ceased to be in 1947]. WO's of post 1970 are RATING warrant officers and not as they were in these days.

No photographs recorded for the WW2 years.

Two pictures of this period called first and after. 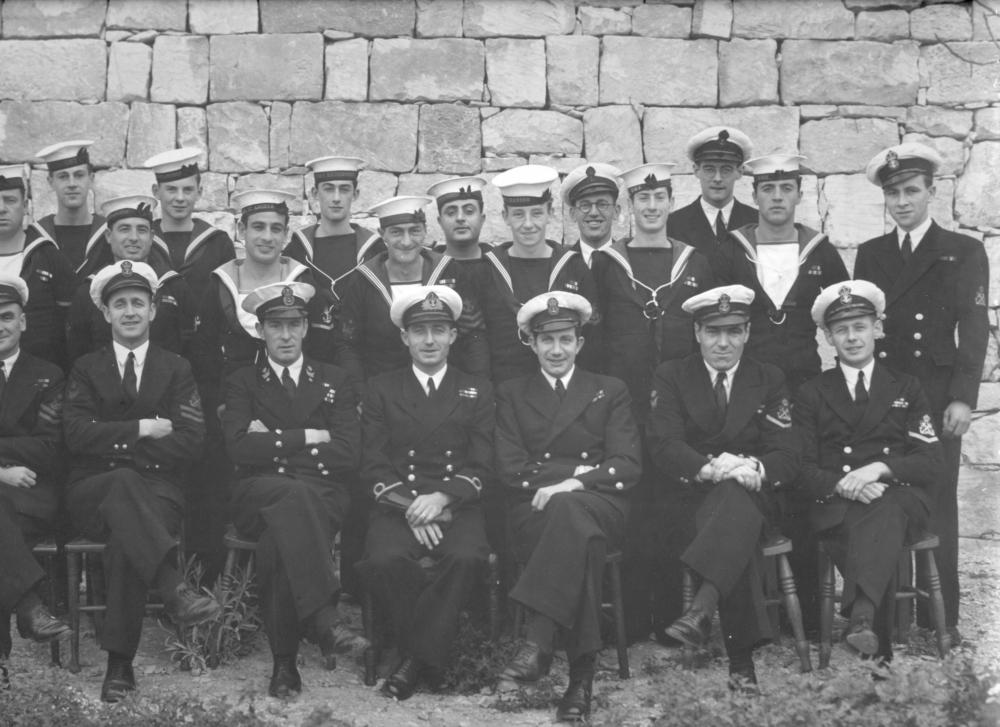 This is first [takes in the extreme right hand senior rate] and you can see the sparkers are back in number. 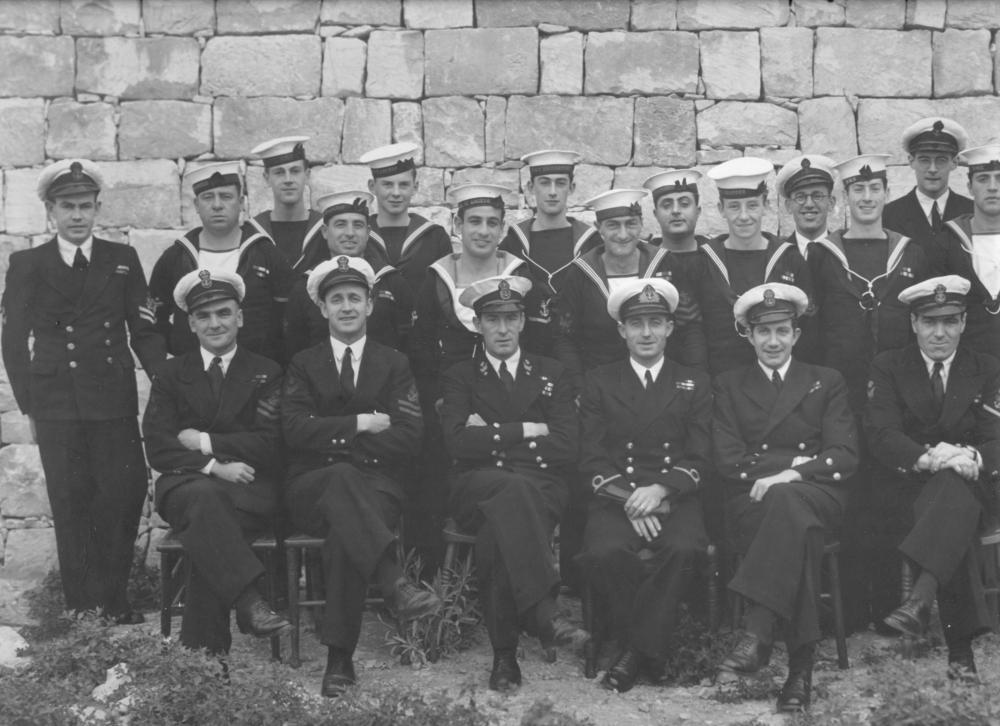 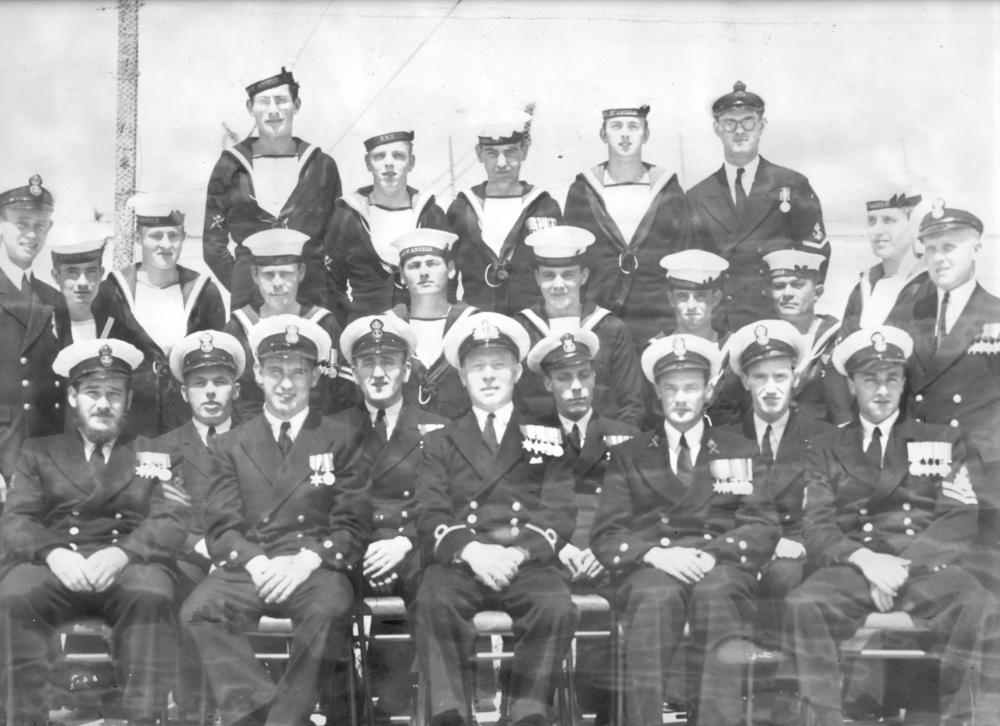 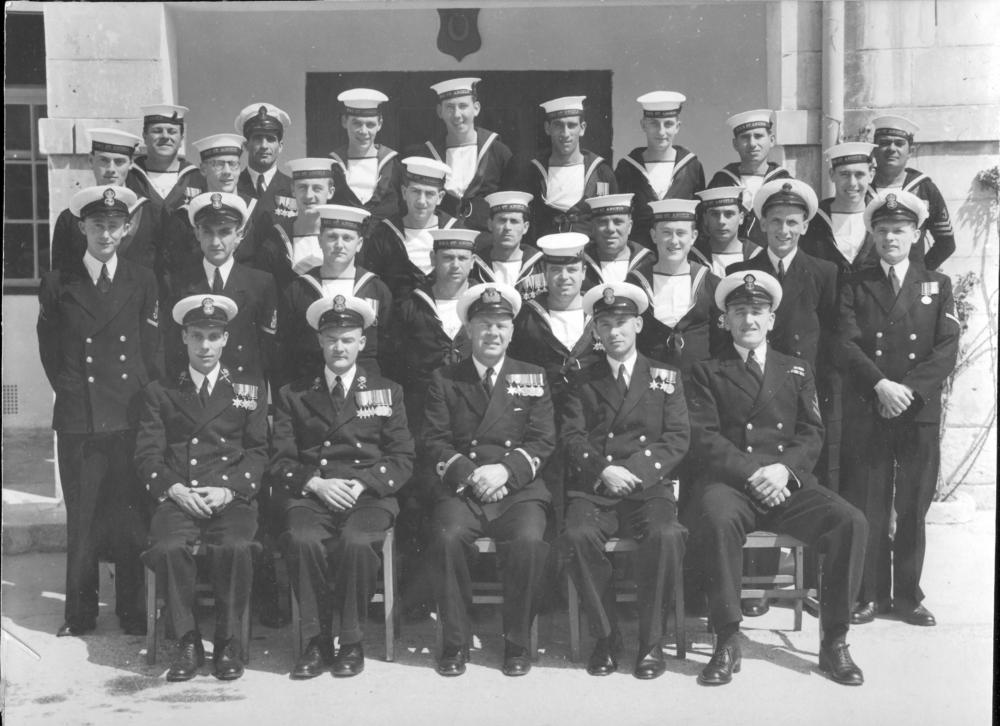 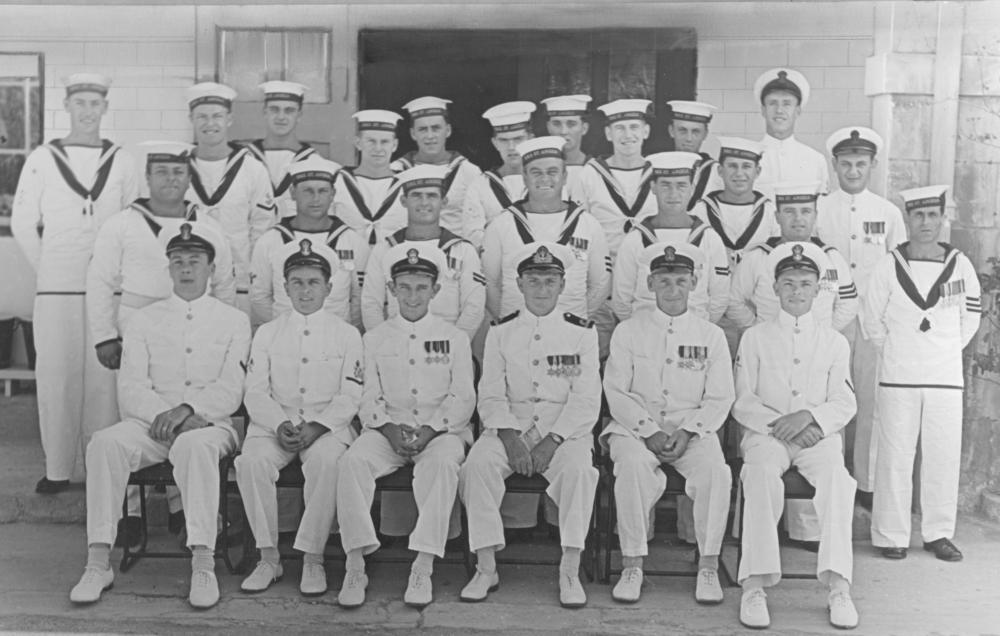 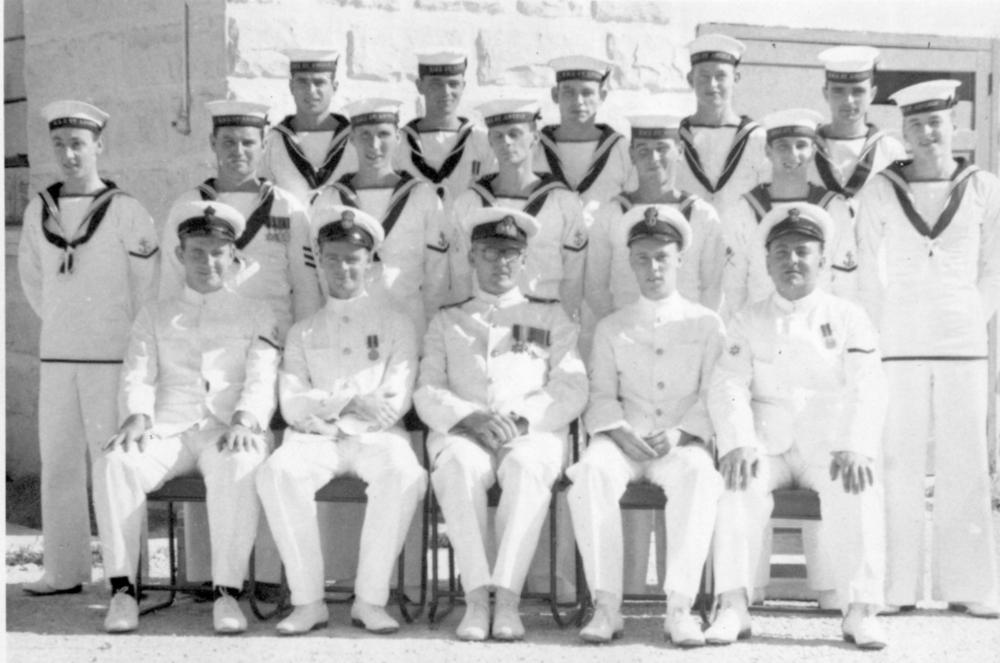 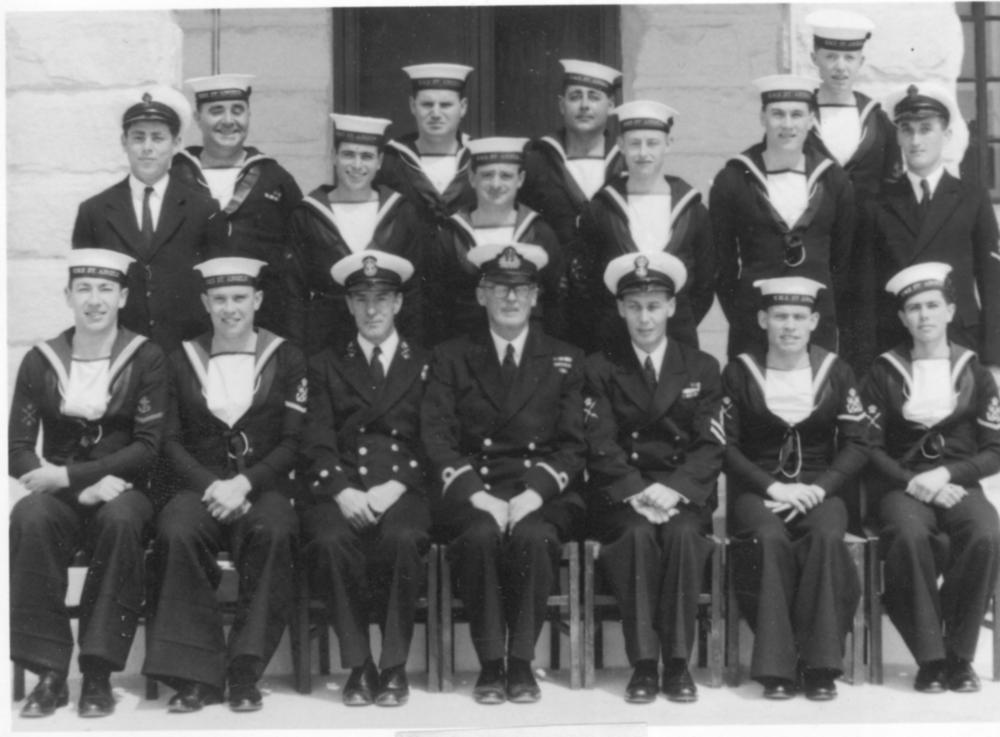 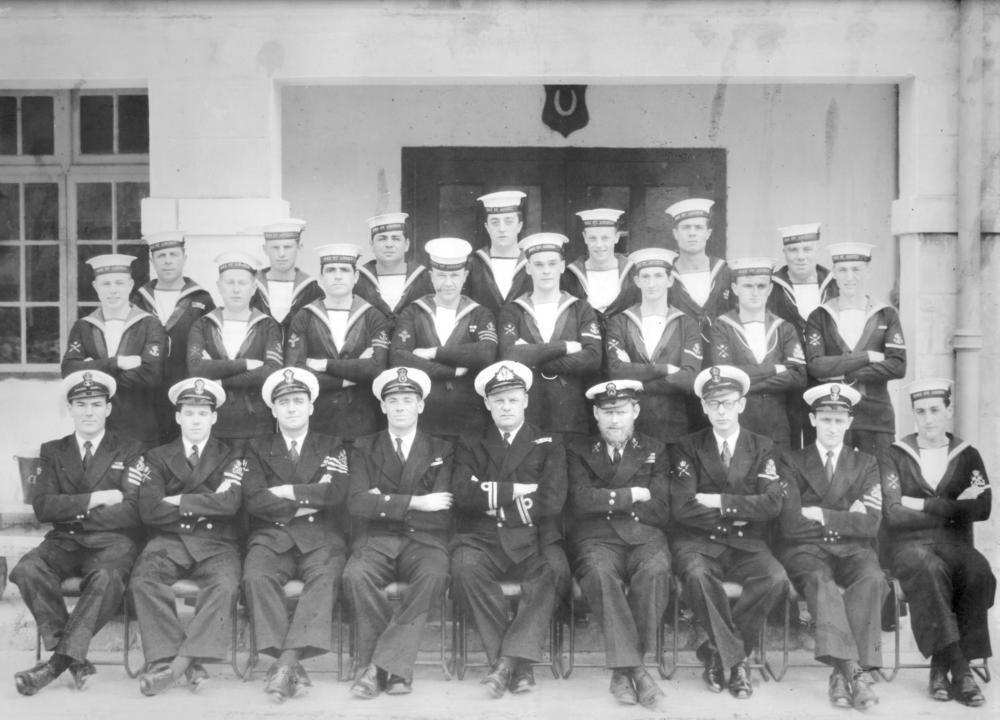 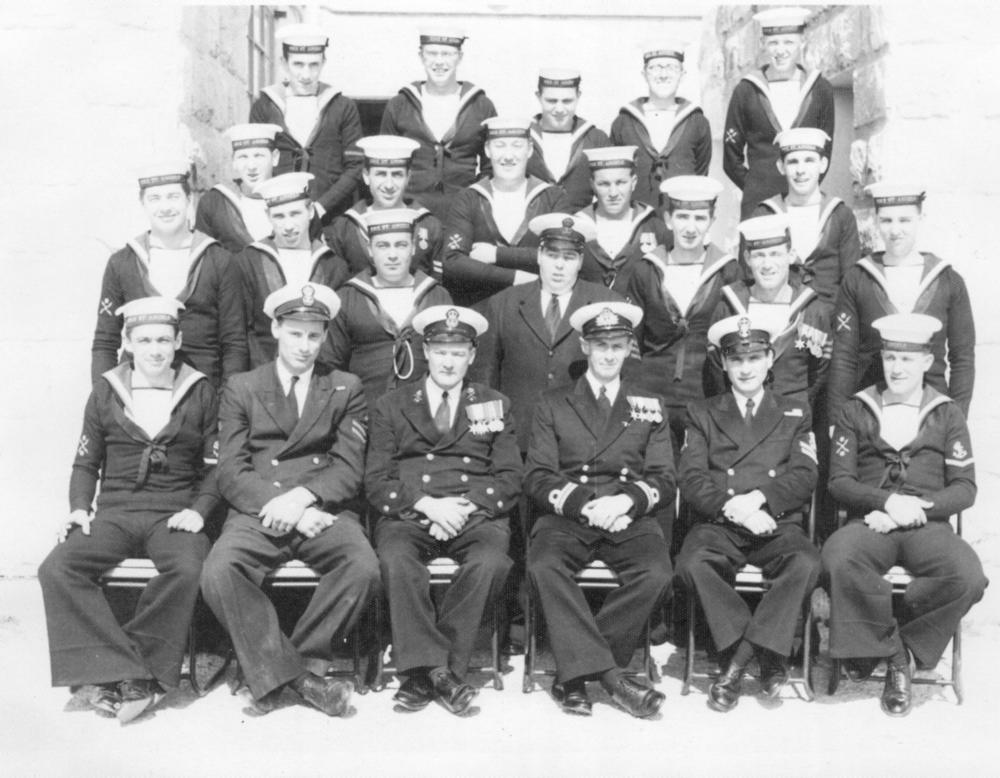 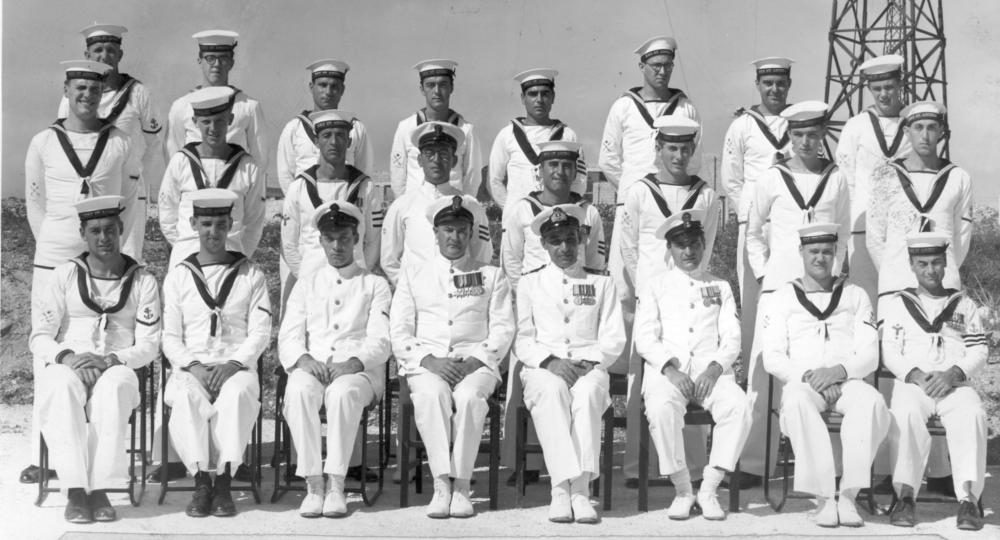 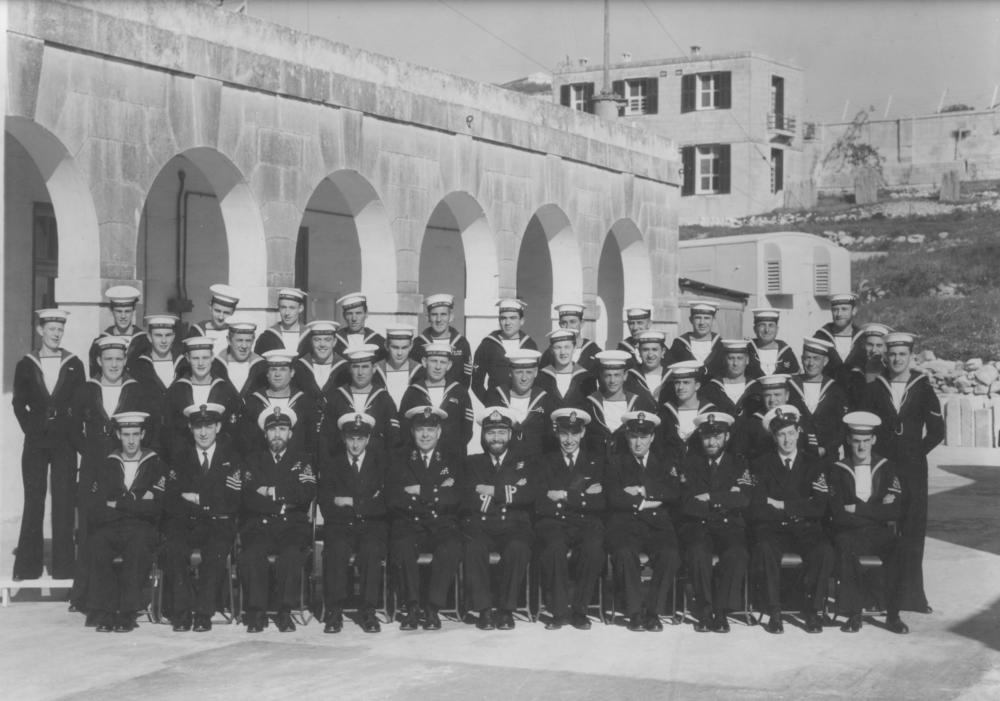 No name, no claim, no packdrill ! Possibly Rinella W/T 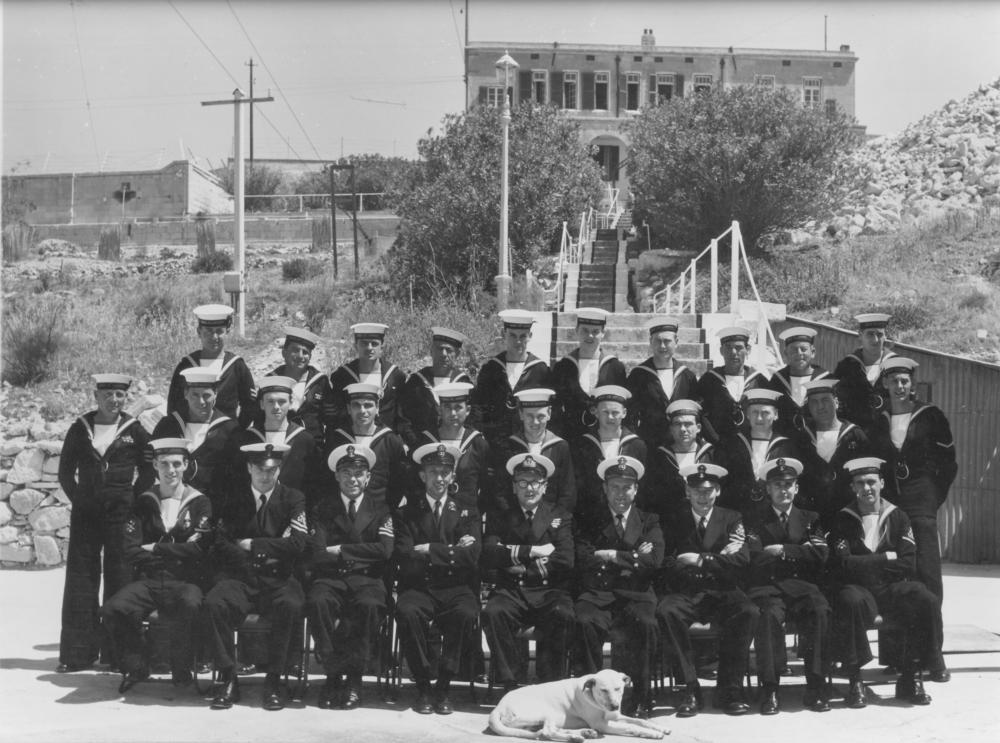 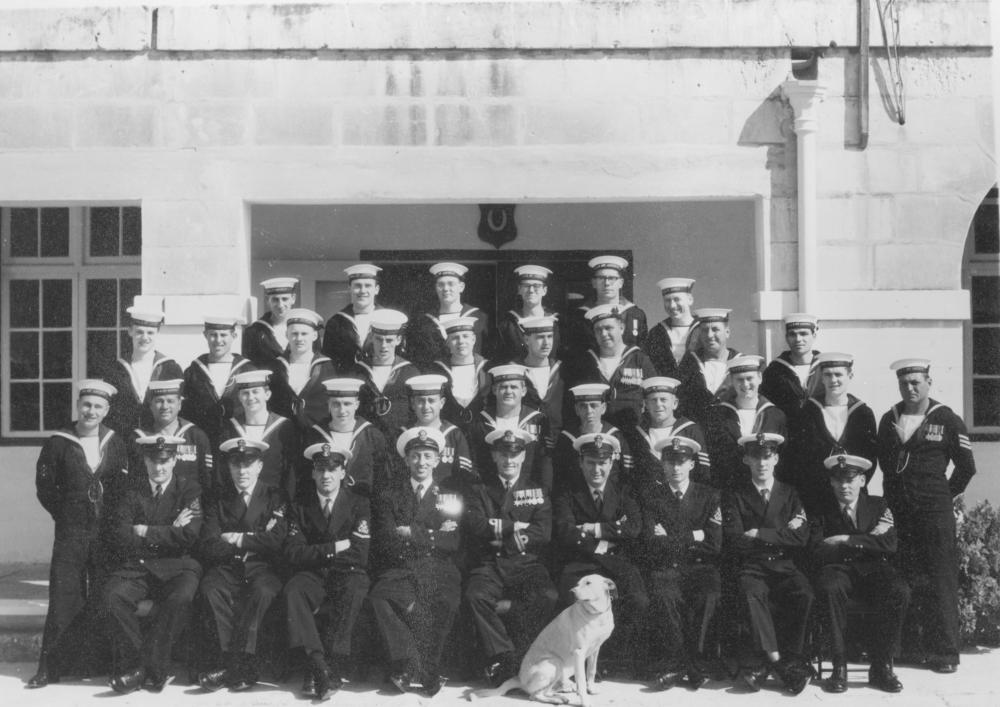 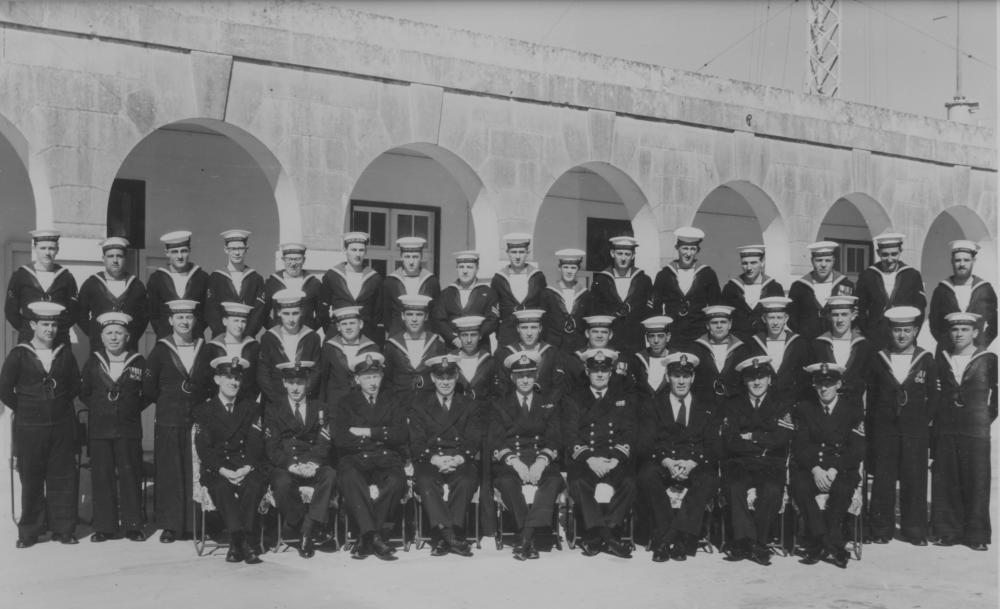 No name, no claim, but a group borne on the books of HMS St Angelo. 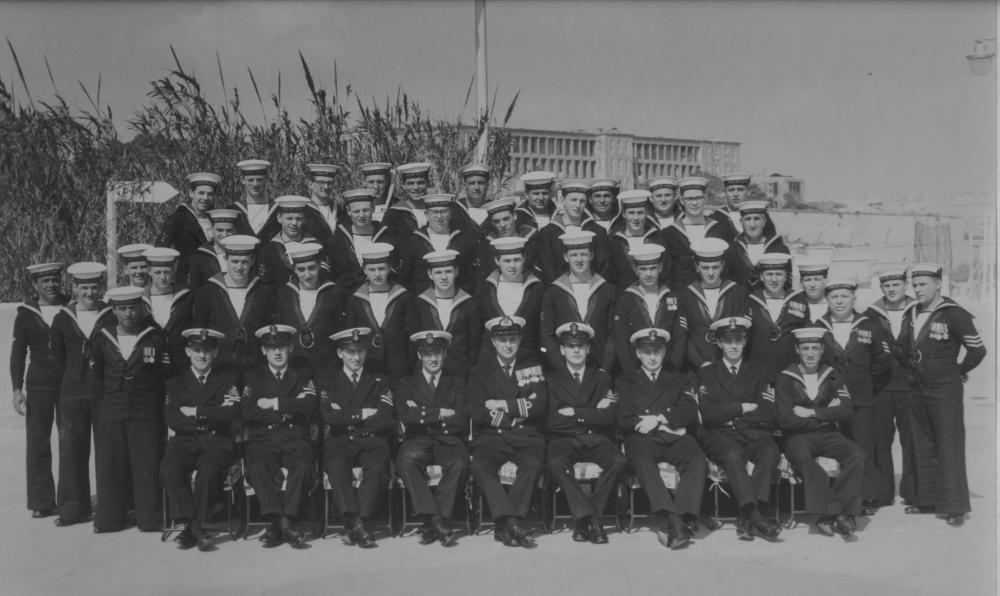 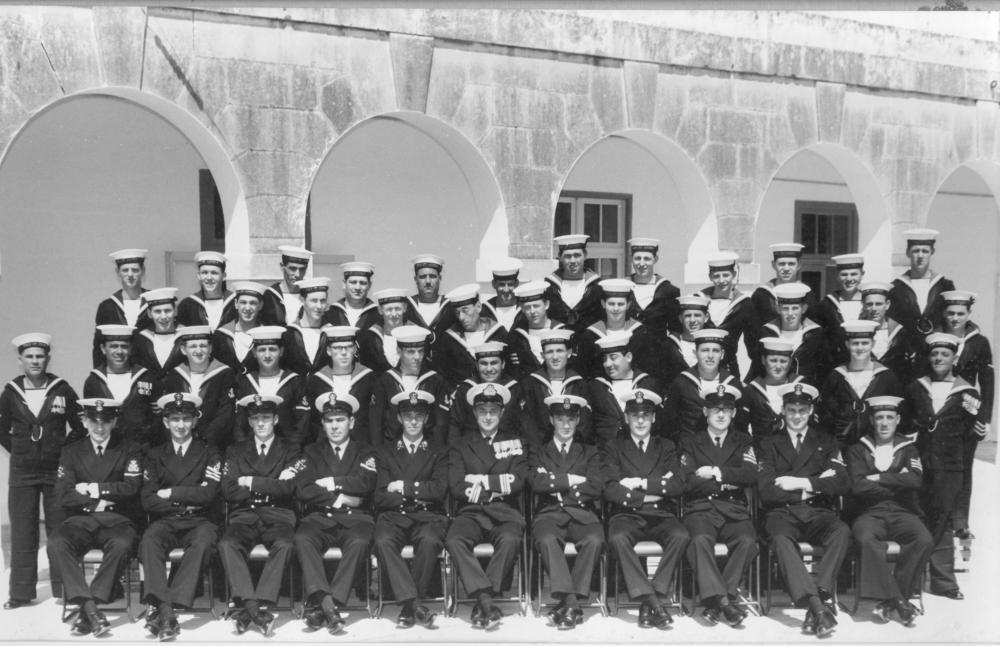 No names of people or the group, save only to say, it is definitely one from HMS St Angelo.' 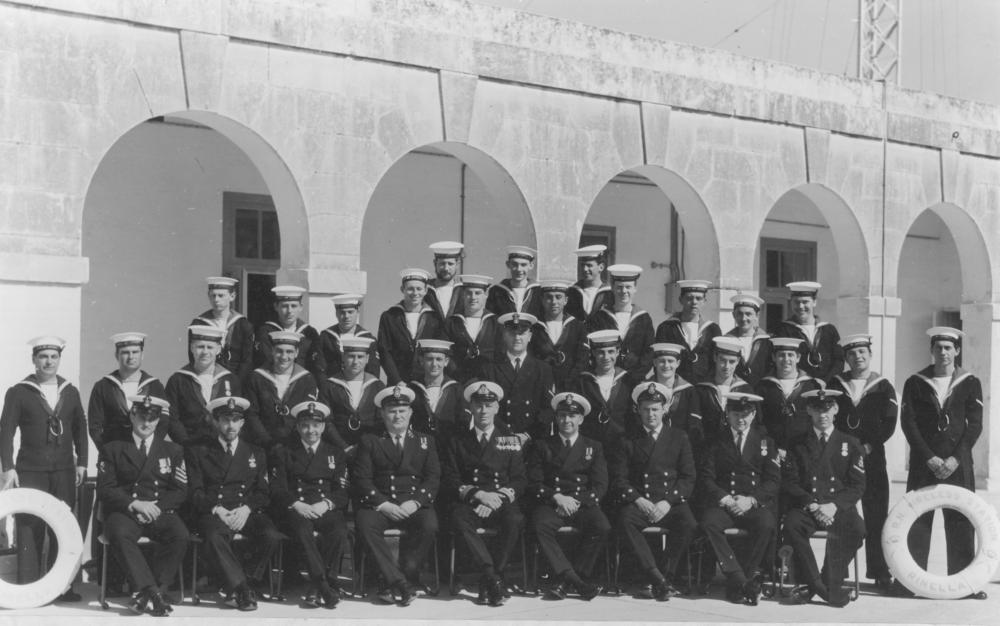 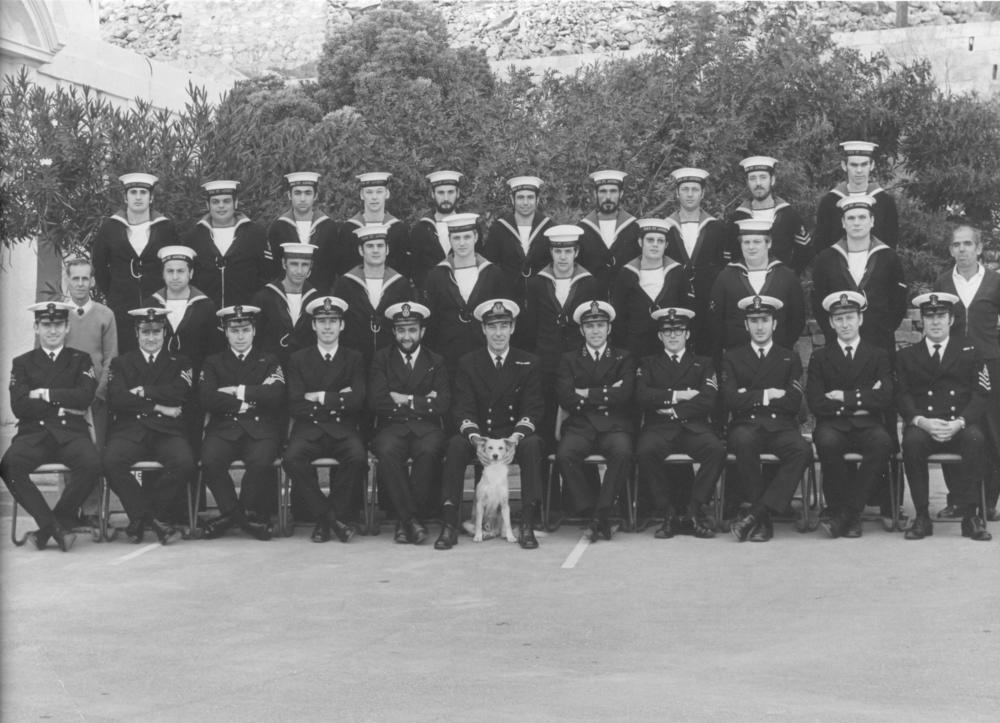 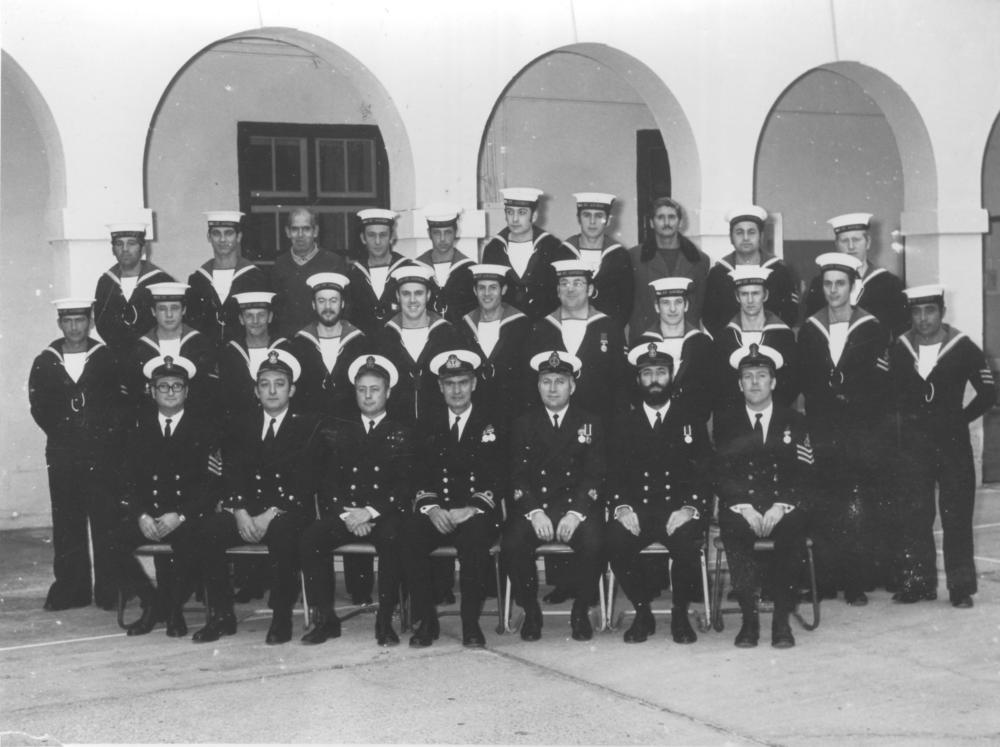 What an anti climax -guess what? No names!

This begs the question in the most polite way, that sparkers could help man Naval  W/T Radio Stations but to my certain knowledge greenies, in all their forms and shapes, could never have helped out running a commcen on a routine basis, i.e. when free of defects. The commcen at Lascaris immediately across Grand Harbour from Rinella, and from out in the western sticks at Zebbug  connected to the Valetta Commcen by telephone transmission lines sending data to Rinella for outgoing signals to the Mediterranean and beyond,  and aerial inputs from Zebbug's receiving aerial farms fed to receivers in Lascaris bringing radio signals from ships all over the world, merchant and warship.

Fortunately for me, I had a certain input into  all of this and sat for hours on the end on 8Mhz ship shore [callsign GYX4] in Lascaris  as often as not bored for the  lack on Mediterranean fleet ships calling in,  so I tried my utmost to encourage merchant ships, always major well known cruise liners, like the Cunard Queen's GBSS and GBTT, an encouragement   called a "QSP" which meant 'give me your traffic and I [callsign GYX = Naval Malta] will deliver it free of charge to it destination'.  If the message, usually an important telegram couldn't attract the normal station's worked by these liner  [Portishhead Radio on frequencies called GKL, GKS, GKG etc on the same 8MHz band as I was listening to,  it was wise and prudent to send their telegrams to me for speedy delivery on FX Malta - Whitehall Wireless TARE service which expedited its arrival at its destination.