In keeping with 'we all remember our first this and that', here are a few facts and figures about my Captain of HMS Ganges [1953], my first of many captains in a 30 year career. 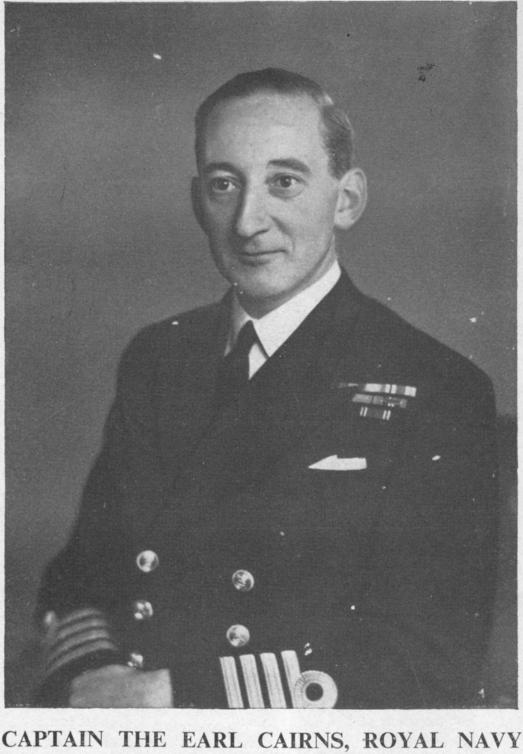 David Charles Cairns was a career naval officer born into a family in which, in time to come, he would be created the 5th Earl Cairns.

David's grandfather, Hugh MacCalmont Cairns, was created 1st Baron Cairns of Garmoyle County Antrim [UK] in February 1874. Four years later, in September 1878 his title changed to {A} 1st Earl Cairns [UK] and {B} 1st Viscount Garmoyle County Antrim [UK].  He had seven children. The eldest, a boy, died in infancy; the second, a girl and therefore non-inheritor died when aged 29; the third Arthur became the 2nd Earl but died when  aged 29; the fourth Herbert became the 3rd Earl but died when aged 40; the fifth, Lt Col Wilfred Dallas Cairns, Rifle Brigade [Captain Cairns' father died in 1946] became the 4th Earl; the sixth died in 1936 and the seventh in 1939. David, who being the eldest son, joined the navy using the title The Hon David Cairns, became the 5th Earl on the 23rd October 1946 whilst appointed as the Commander of the Cruiser HMS Sheffield. Upon his death on the 21st March 1989 when aged 79, his eldest son Simon Dallas Cairns became the 6th Earl Cairns.

David Cairns married his wife Barbara Jeanne Harrisson BURGESS on the 16th April 1936 as a Lieutenant whilst serving at Greenwich. She became COUNTESS CAIRNS on the same day as her husband became the 5th Earl Cairns in 1946. The Earl and his Countess {Lady Cairns} lived at the Captains Residence HMS Ganges which was {is} a beautiful Tudor house set in its own lovely grounds at Erwarton in Suffolk just a few miles from the Establishment. They lived there with their three children, the eldest of whom was The Hon Simon Cairns [to become the 6th Earl], his brother Hugh and sister Elisabeth. The Countess died on the 12th May 2000 aged 83 but of profound sadness to her was that her daughter Elisabeth pre-deceased her in 1998 when aged just 54.