Hello.  I hope that you enjoy seeing these old photographs of

They are all thumbnails so click on them to enlarge.

A TIP TO HELP WITH VIEWING PHOTOGRAPHS.
1.    CLICK ON A PICTURE TO ENLARGE IT
2. USING YOUR MOUSE, POINT TO THE TITLE BAR OF THE OPENED PICTURE AND MOVE THE PICTURE TO WHERE YOU WANT IT TO BE
3.  READ THE TEXT ON THE PAGE AND MANOEUVRE THE PICTURE UP AND DOWN TO SUIT. YOU CAN EVEN USE THE TOP OF THE PICTURE AS A RULER
TO UNDERLINE EACH LINE OF TEXT AS YOU READ DOWN THE PAGE.

My first photograph shows the boys [then, more commonly referred to as Cadets]  of HMTE Shotley shortly after the "stone wall frigate" was opened. This casual group is standing on the Quarterdeck with the gable-ended entrance to the Long Covered Way on the right. Note that the mast has not yet been erected and that power lines are rigged over on the back centre which is the start of the Short Covered Way. Note also the Ganges figurehead, the Indian Prince whose head can been seen towering above the boys just left of centre rear. The date ? Approximately early 1906. Now look over to the right to the two boys on the right flank.  Between them is a pronounced gap.  Look directly above that gap, into the sky, and there you will see a pole jutting over the top of the roof.  That will soon become significant ! 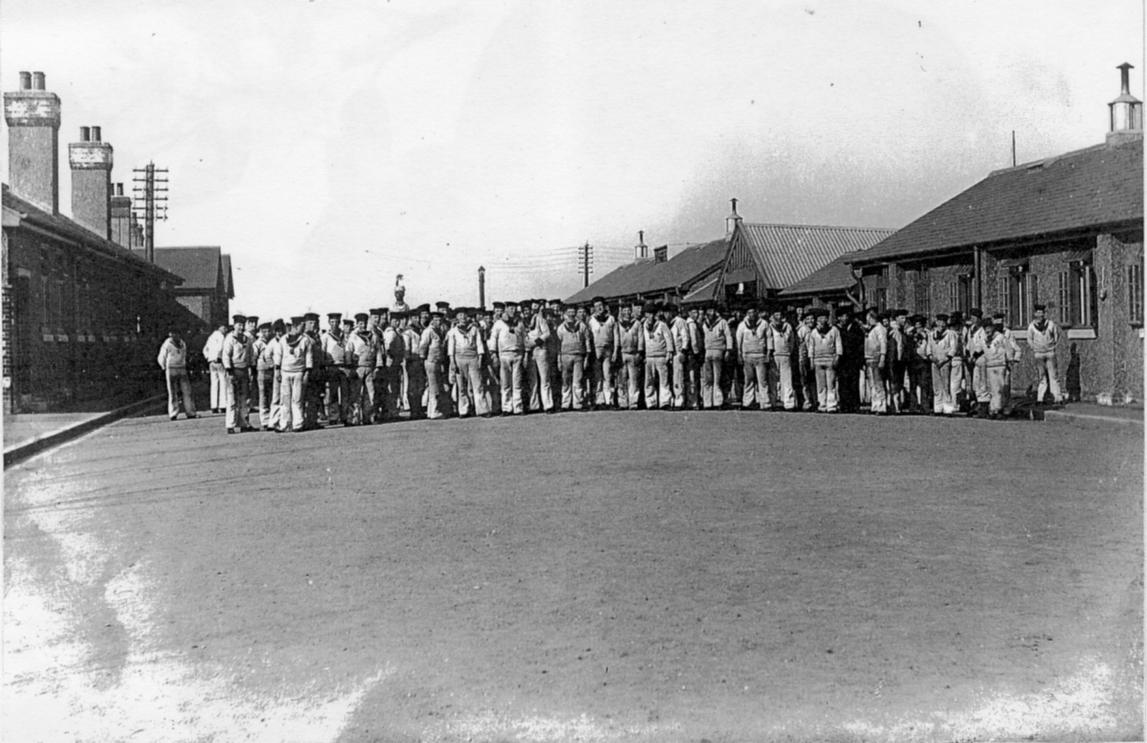 Next comes a similar photograph of boys [cadets] mustered on the Quarterdeck this time for Prayers. Note that the power lines to centre and right rear have gone and two masts have now been erected. The closest mast in rigged on the Quarterdeck immediately opposite the entrance to the Long Covered Way with a capstan and a dais with a wooden balustrade. The main mast , with the Iron Prince gives a prospective of the height of the safety net.  What an awesome sight the mast must have been to these boys when it was first erected. The date? Approximately 1908. 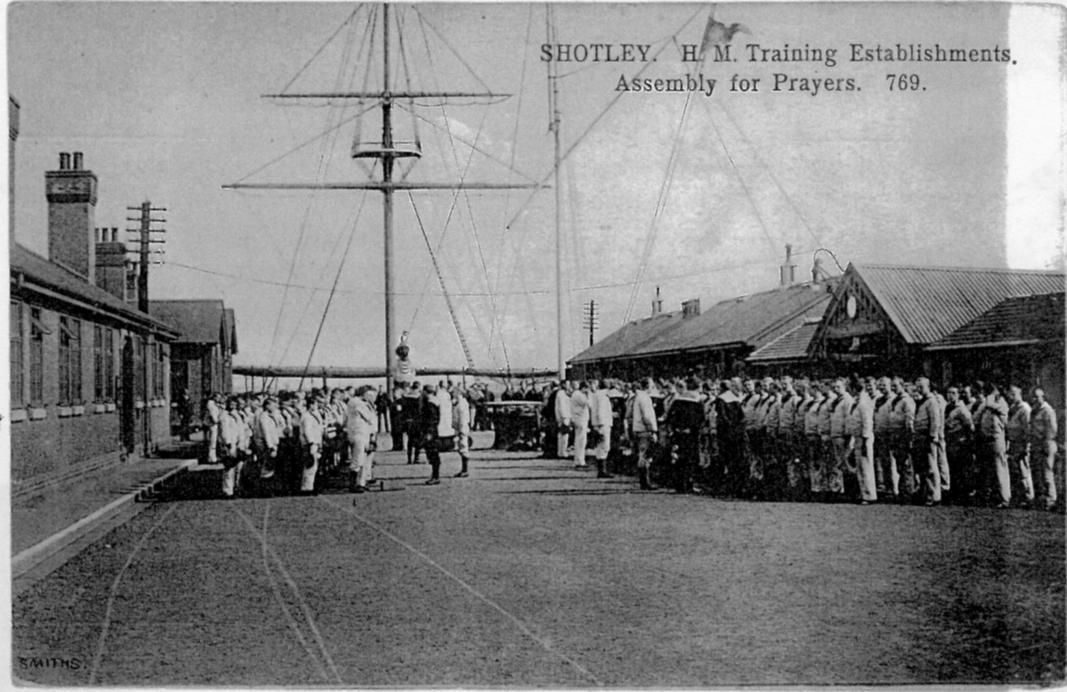 The following four photographs are dated 1904 to 1914 so are pre WW1. They show four aspects of training. The left hand picture [No 1] of Heavy Gun Training shows three members of the training staff. Two of them, in blue serge square rig are petty officers [they changed into fore and aft rig in 1920] and the other a chief petty officer, one of those horrible CGI's I would have thought. Picture 2, taken in No1 Gymnasium is of a boxing match and shows the pugilists between rounds being wafted by their seconds to cool them down.  Notice the boys on the top of the wall bars over to the left of the picture. No 3 is taken down on the range, but what is a MORRIS TUBE ? Well,  a Morris Tube was inserted into the barrel of a rifle enabling it to fire a smaller calibre round.
This would allow target firing in a drill hall without the need to construct a full rifle range. The original Morris Tube as used with .577/450 Martinis was in .297/230 centre fire calibre. The aiming tube was removable and the rifle could be fired in either calibre depending whether the 25 yard indoor or full length range was being used. This is the ball round with a solid steel Inspectors dummy.  When the new .22 Rimfire cartridge was approved in 1906 these Morris tubes were bushed to accept the new cartridge and new tubes manufactured for the .22. Because the new cartridge was rimfire it required an off set firing pin and so lee-Metford, Lee-Enfield and Short Lee-Enfield rifles were converted with a special bolt head with a free floating offset firing pin. It was not intended that these tubes should be removed as obviously the rifles could not fire .303 rounds any more. Finally, No 4 picture, the firing of a Maxim Gun.  Two CPO's in attendance and the mast looms large just behind the group.

The first picture  in the PDF file below  is of HMS Ganges' FIRST MAST.  The establishment itself had not been completed when this picture was taken in 1904 in the grounds of what was to become HMTE Shotley. It is the very first training mast on which boys were taught the 'terra firma' act of climbing the rigging, bearing in mind that the ship Ganges [with real rigging] was just behind them off-shore of Shotley Gate/Shotley Point.  However, it had a dual purpose, the other being to train signal boys in flag hoists, and from 1908, after the main mast was erected,  it became known as the F.S. meaning Flag Signalling.  I can count five petty officer instructors. Note that the rigging starts at grass level on the two sides of the gantry not in full view. This mast [which has had its top cut off by the photographer so there is no way of knowing how tall it was [but see the bottom picture in the PDF file below] was erected near to what was to become the short covered way [to the right of the main mast looking with our backs to the quarterdeck] and was in fact demolished to build the short covered way and post office.

The bottom picture in the PDF file above is another of the fledgling HMTE Shotley taken in 1904. This one is very interesting [as indeed they all are], so let me talk you through it. First off, ignore what appear to be the masts of giant wind turbines which now litter our land ! They are the result of bad archival practices in the storage of the picture. Now look at the mast you see over to the right.  That is the brown coloured mast you have just seen in the picture above, and now we can get some idea of its height.  This was Ganges' first training mast and in picture one above, you saw the top of it jutting out over the roof of the Long Covered Way. So where are we ?  Well the house you see in front of you is the QARNNS Officers mess [built in 1900 when the hospital was built] and the four low buildings you see to the right of the house are the backs of the Long Covered Way messes numbers  four, six, eight and ten with number two mess behind the house, all on the RNSQ side. These were the DO's offices.  To the left of the house is the Quarterdeck, and the building you see on the left of the Quarterdeck is the Captains Office block immediately opposite the entrance to the Long Covered Way. At this end of the Captains Office block is a lawn and over that was built part of the Wardroom. The roadway leading off to the left this side of the lawn, leads on to Signal School Lane and through the corner gate, into School Lane. Note the figurehead outside the QARNNS Officers mess of a naval officer wearing his two cornered hat worn athwartships - this was almost certainly an out-of-bounds warning sign.  Around 1795, officers' hats went through a transformation. Gold lace became confined to flag officers in both dress and undress uniforms; captains wore it only in full dress. The three-cornered hats became two-cornered. It was at first worn 'athwartships' by all, but this soon became the prerogative of flag-officers, and others wore the hat fore and aft. Looking through the Quarterdeck, one can see that the hallowed parade ground [at least that is, for the automaton wind-up clockwork gunnery instructors] is still a green field beyond which is open country - no PO mess, Nelson Hall, Mast, CPO mess, Swimming Pool etc etc. The newly laid lawn and garden at the middle to lower left of the picture became the officers fish pond, rose garden and water fountain area. Returning to the backs of the Long Covered Way Messes [2 to 10]  and after it, the Main Galley, the thoroughfare you see led down to the Seamanship School and to a cross road bisecting the Long Covered Way between the southern end of the Galley and the restart of the Long Covered Way messes, namely 11 and 12 [they, as you will recall, then continued right to the very bottom to the last of the Anson messes]. The cross road I have just talked about led from this point across the Long Covered Way and on into the library, the gymnasium etc etc. One can clearly see that this thoroughfare [behind the QARNNS Officers mess] is falling away, going down hill, and later on, once past this crossroad, it become more and more precipitous as it approaches the River Stour.  At this point, it became the infamous Laundry Hill.

Now, the photographs from 1926 both of the main entry into Shotley Barracks. As you know, the road you see is called Caledonia Road which leads from the Shotley Gate Post Office up to the main gate of the establishment. The mast is clear to see in both pictures. In picture one, note the lack of houses along the right hand side of the road where now there are many houses.  On the left, where the CMG now is, the playing fields came right up to the hedging shrubs which lined the boundary. Picture two shows two giant sized figureheads either side of the outer gate brick pillars which is enough to scare anybody, let alone a nozzer. Underneath each figurehead is a threatening piece or artillery. Perhaps of most interest, and rarely seen like this, is the entrance to the Short Covered Way in full view through the gate. School lane is shown on the right. Once again, there appears to a an obelisk in the middle of the picture but this is caused by dampness.