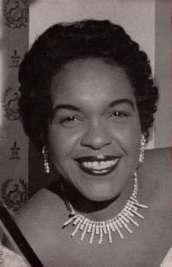 Winifred Atwell who died in Australia in 1983 aged 69.

Do you remember learning to type to the piano music of Winifred Atwell, with, and most importantly, BLANKED OFF keys? If you do, then just below you will find a link to her music from 1950 which is called Britannia Rag.

This snippet, courtesy of British Pathe shows Hungarian women in 1937 learning to type to music. Some pretty faces here and of course not at all like Ganges when not one woman ever appeared in the signal school, pretty or otherwise! 1937 style typing to music.wmv

The other day, I came across a black hardback [cardboard] folder measuring 13½ inches x 12½ inches, and inside were gramophone record folders [sleeves I suppose] each one with the centre circle cut out to allow access to the name of the record. The label on the front cover read. 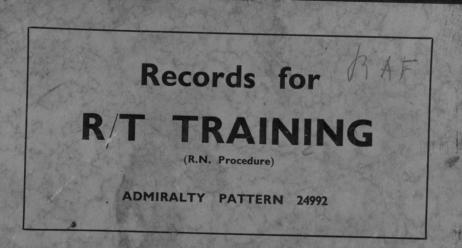 Inside, in some of the sleeves, were broken bits of Bakelite records, some which had formerly measured 12 inches in diameter and another types which measured 10 inches in diameter. Regrettably, none had survived and the sounds on them have been lost for ever. They were a mixture of old learn to type records of commercial derivation [the larger records], and military records from which Radio Telephone procedures were taught [the smaller records] both types running at 78 rpm. Even the centres of the records had been destroyed or damaged, but as you will see, I was able to resurrect something from the debris. All the centres of the learn to type records were the same [three of them], and not one said what the record contained, music, sounds or the spoken voice. Again, there were three military records covering several subjects of R/T training on their six recorded sides: the military records were - 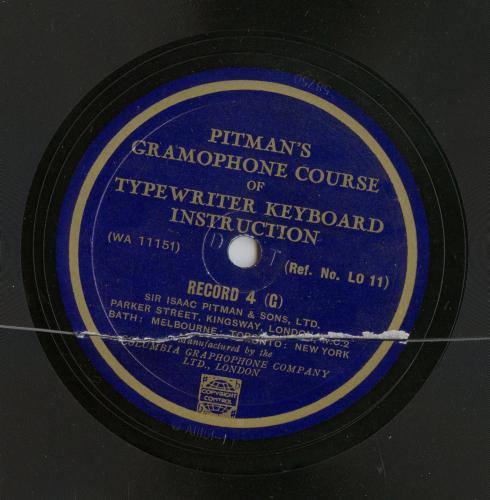 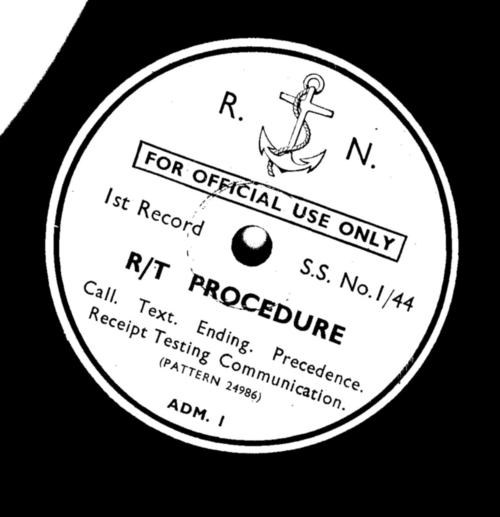 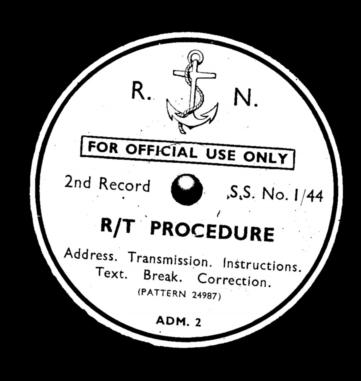 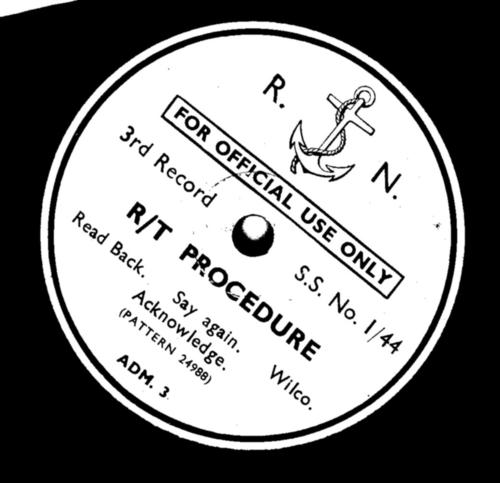 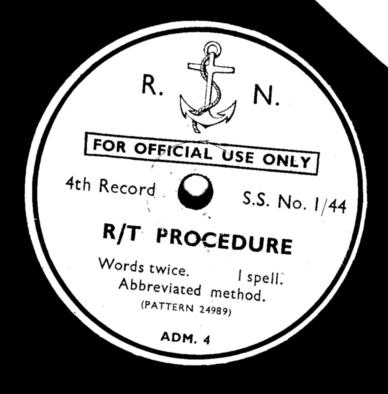 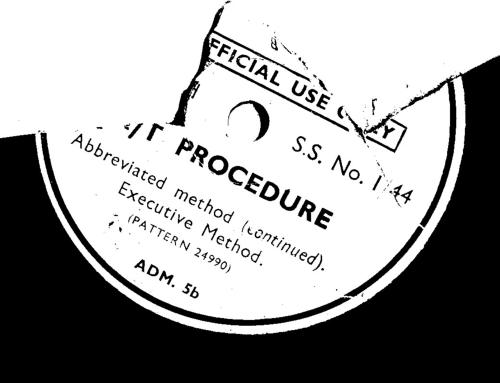 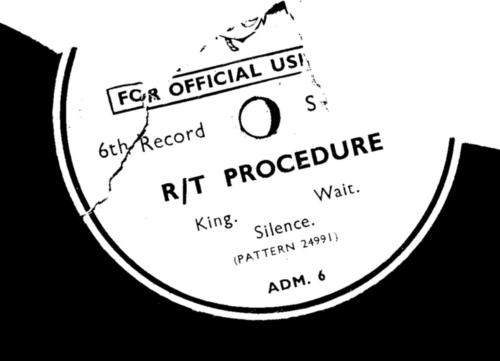 There were two more records [badly damaged] marked A M [for Air Ministry] "Speech for R/T" Part 3 and underneath "Admiralty" For Official Use Only, and one of them is shown next. 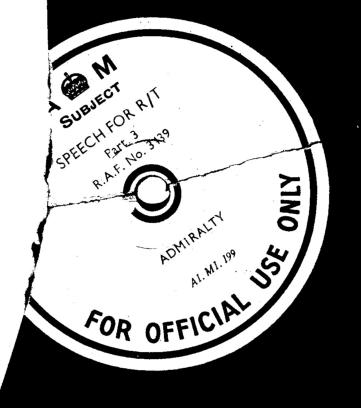 The military records in particular, if they had been complete, would have been wonderful artefact from WW2.   No doubt that copies are preserved for posterity somewhere in an archive.

Meantime, does anybody want a bag full of nostalgic bits ?

Whilst on the subject of core Part II training, do you remember how your learned the Morse code Ganges-wise, i.e., not scout-wise etc?  Remember Part I was square bashing, kits, cleanliness, mast climbing, swimming pool, fitness etc, and Part II was branch training, both done together in Ganges back then prior to mid-1972. Part III, later on affected a few people although a relatively few, and took the form of specialist training.  For example, submarine training - flying telegraphists training - naval commando training almost exclusively for telegraphists:  training for 'branch qualifications' and advancement in that Branch  didn't count as Part III training, so becoming a linguist as a Telegraphist Special [Tel S] or later as a CT [Communications Technician] was an integral part of your core Part II career training.

It would be folly to generalise, so I'll give you the run-down for my own core Part II training, before I move on to how the sailors in the USN learned their skills, just in case YOUR training differed from 1953.

Until mid to late 1975 when the navy issued to each ship [and sometimes to individuals] a little plastic attache case coloured red, inside which were many prerecorded cassette tapes of MRX's [Morse Reception Exercises] designed, with the assistance of a pussers supplied playback machine with earphones if and when necessary, to keep the operator's skills up to date no matter what his employment was [for example when pos [Part of Ship] duties like communal party, or when the ship was in refit and there were no opportunities to keep one's practical skills high, practical "biffer" exercises were not always available.  That little red cassette case was a panacea and no sparker had an excuse for lapsed Morse reception  skills. However well before that time, there was a definite excuse and skills were neglected throughout the fleet, even in places like Northwood and Admiralty never mind in remote places like Lochinvar and Malabar.

Meanwhile at Ganges, Morse reception was taught from the autohead routed through a matrix acting as an aerial to several rows of B28 receivers, received by pencil by the tenderfoots and by the Imperial typewriter by the hardened boy telegraphisits when learning to Morse type, with an uplift of speed for the latter group. Then, during MTX's [Morse Transmission Exercises] led by our instructor, a PO or a CPO Telegraphist, we acquired a skill of real-world reaction to a Morse message, rather than just recording it for a senior to read. The two acquired skills honed the overall necessary skill of being fully conversant with the international  Morse code environment - sending and receiving - and once that was taken on board, all that was required was an upping of the speed of the Morse. [Note there were other Codes developed by people other than Morse, all foreign of course, with even the USA having its own Code!  All  that Morse training  was done in the classroom environment, and at no time did we take Morse [proper] into our messes, which, to be frank, revolved solely around Part I training.  Because of the intensive classroom training, both signal school and academic school, more and more did we leave scheduled Part I training curriculum-time-slots, and many prizes were on offer for best W/T class, best V/S class, all of which in our grasp, and lost at our peril! In contrasts to our seaman brothers who spent just 12 months at Ganges whereas we communicators spent 15 months,  and most of that time difference was professional training at the signal school and less so at the academic school.

Now, we know from my web pages, that in WW2 our telegraphist performed less well than did the USN telegraphists and that could have been due to the way the USN taught their budding sparkers. This is what happened outside the confines of their formal teaching facilities.

Available from many sources was a library of 78 RPM bakerlite records which changed to vinyl records sometime later.  The Morse code library comprised of records with ten parts, each with many examples of Morse code trains. Some trains were diverse but the early examples viz Part 1 to Part 3 were based on escalating dots and dashes, like these dot's to dah's =  'e' 'i' 's' 'h' '5' '4' '3' '2' '1' '0' followed by variants on that theme.  Part 1 lasts for 4 minutes and Part 10 longer with all the variants to master. Students were encouraged to 'borrow' these records and with record players in abundance available twenty four hours a day, students could elongate their training day to double what was scheduled in their syllabus.

All four parts took up nearly one hour to listen to [this 78/mp3 @ 13 wpm]  and when rerecorded as MP3 files from the noisy and scratchy 78's, took up nearly 65 MB as a modern file. I have refrained from publishing a full file and instead I have recorded just Part 1 = nearly 5 minutes and nearly 6MB online,  for your information. The scratchy and noisy playback caused by the original and old 78's tends to get through, so I have toned down the amplitude enabling it comes over as a quiet and enjoyable file [if that's your scene?]