There were many boys who joined the navy and they all had one thing in common - they were young and vulnerable.

From the word go, the navy would teach them discipline [harsh at times] and give responsibilities to those who showed the tiniest amount of leadership potential.  From this group {or corporate} discipline would come self discipline which would lead to a responsible well balanced adulthood.  Hence the saying, relevant to all types and kinds of boys, which was that the navy turns boys into men.

On this page we are going to look at the badges of responsibility for the three main groups of boys, namely officer cadets at Dartmouth; Boy Artificers who in 1920 became Artificer Apprentices at Fisgard and boy seamen/communicators at Ganges.  However, there were many other groups of boys.

At Dartmouth and Osborne, cadets were chosen to become 'Cadet Captains' and 'Chief Cadet Captains'.  Their job [applicable to the other boys we will mention at Fisgard and Ganges inter alia] was to marshal their class and to generally assist the training staff as demanded. 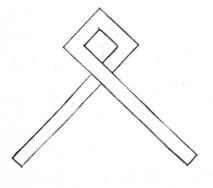 was worn on the right cuff of a Cadet Captains 'working' uniform and on both cuffs of a Chief Cadet Captains uniform.  It was made of ¼" gold lace in the form of a chevron with a large diamond at the top point.  When wearing their best ceremonial uniforms the top diamond was embellished with a small silver anchor.

Artificer Apprentices had a similar device it too being made of ¼" gold lace and in the shape of a chevron. This badge consisting of a 79º inverted chevron and a star, was worn as follows:- 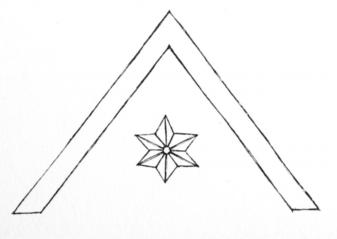 The other Boys Training Establishments  viz Ganges, St Vincent, Impregnable had their own set of badges and insignia.

From almost day one of the printed regulations for the Training of Seamen Boys, a boy could earn up to two gold lace badges which were ordinary good conduct badges as worn by trained sailors in the Fleet after they had served ten years with very good character. Additionally, a good proportion of boys were rated petty officer boys and they too were allowed to wear the badges worn by a second class petty officer in the Fleet. Many in the Fleet were a little taken aback by this apparent ridicule of their status and by 1878 there was a demand for change in the design and procurement of boys badges. The two pictures below show the badge of a 2nd class petty officer and the size of a good conduct badge {GCB} in comparison. That there are three GCB's shown  is by design to support the follow statement. The GCB was introduced in 1849 for good character into what was an unruly and ill-disciplined navy.  The first one was given after FIVE YEARS of good character, the second for TEN YEARS and the third for FIFTEEN YEARS. Time served in the merchant navy of good character could count, so a man could get his GCB's as follows. The first after seven years of which TWO must be in the RN; the second after twelve years of which THREE must be in the RN and the third GCB after seventeen years of which FOUR must be in the RN. In 1860, the first GCB time was reduced to THREE years so that the second and third badges were awarded after EIGHT and THIRTEEN years respectively. One should now be able to see why sailors in the Fleet were upset on learning that Ganges boys [for example] could get and wear these badges after just a few weeks in the navy. This system of GCB's at the 5,8 and 13 year periods of good character lasted right up to 1950 when it was changed to 4,8 and 12 years at which point they finalised the 15 year mark by awarding the Long Service and Good Conduct Medal with its associated cash bounty.

The pressure brought was heeded by the Admiralty and the boys badges were redesigned and manufactured for boys issue only.  In 1878 the badge of a petty officer boy, hitherto that shown above left, was reduced to a single small crown which was worn atop of a single GCB [now much reduced in size although not shown in my picture below to ½" gold lace 3½" long] or more accurately for a boy, a proficiency badge.  This picture which will help me to describe other roles of responsibilities, 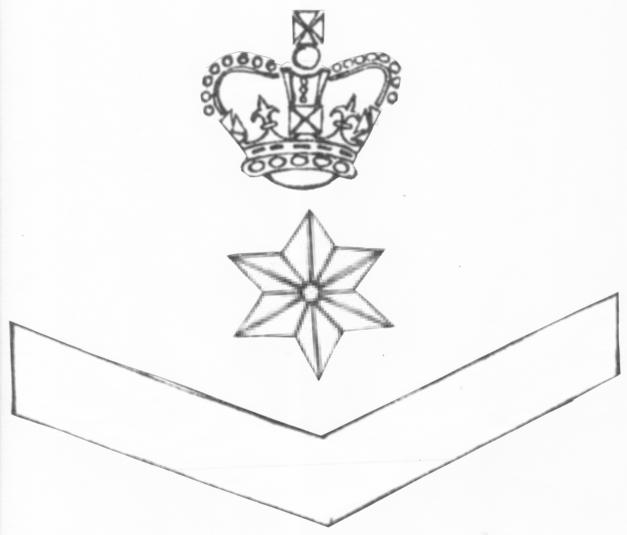 By 1882 it was considered necessary to reduce the number of boys marching around with proficiency/efficiency badges and some could earn up to three of these. A drastic decision was taken reducing the numbers down to a small percent of the number of boys borne for training. By 1890 only petty officer boys could wear as many as three badges and by 1898 that had dropped to two. Others could also wear two and so it was decreed that from henceforth all petty officer boys would be selected from those already wearing two badges.

At this stage, late 1890 early 1891, the Instructor Boy appeared selected from petty officer boys. His badge consisted of his proficiency/efficiency badges [now limited to two stripes] and on top of them was a star and a crown above that. The picture above was the very first instructor boys badge *#.

Two years after the boys moved into Shotley Gate Barracks, in 1907, the number of badges was limited to one only, and these boys were only just inferior to the status of a petty officer boy. Again, using the picture above, take away the star and the crown and we see the situation a la 1907 for boys not petty officer boys or instructor boys. In 1919, that one badge led to a new title of Leading Boy. In 1922 the instructor boy had a badge change to this shown below [I have reduced the size/scale from the that of the badge above] where the star was supplanted by the anchor *#. 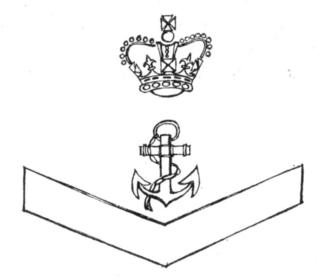 See text below the next image. This is a mid 19th century [c.1855] white duck suit top of a sailors working uniform. Note the stripe around the top of the right sleeve indicating that he was in the Starboard Watch.  Note the single tape around the collar which is attached to the tunic. The three tapes were adopted in 1857. 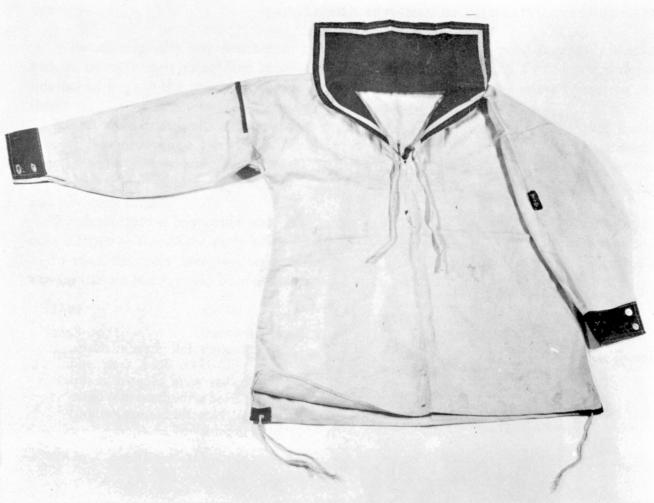 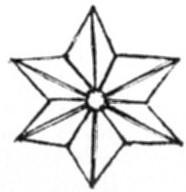 [or shall we call it the Lone Star] was a badge worn by many in the navy as this simple table shows.

In summary of badges used in boys training establishment, have a look at this table.

*# This system of having just a petty officer boy, and from him came first an instructor boy and then a leading boy was not new, a precedent having been set in the real navy in a much early period.

In 1827, there were only seamen and petty officers and sailors were employed for a commission and then literally abandoned back into civilian life to fend for themselves.  If they were lucky [or not so with the press gangs around] they got another ship, another commission with food and drink in their bellies and a coat on their back. It wasn't until 1854 [commencement of] that sailors could sign on for CONTINUOUS SERVICE [CS] with the chance to retire on a naval pension after a set number of years employed. Petty Officers were distinguishable from seamen only because they wore badges on the upper left arm, a single anchor with a crown for the first class petty officer and a single anchor for the second class petty officer.

The badges were cut out of cloth but still were very expensive. In 1832, first class badges cost 3s 6d and for second class, 2s 3d. Twenty years later new designs were added with embroidered gold wire badges given free to the men. Badges of white cloth were still on blue frocks whilst blue serge badges were sewn onto white uniforms.  Badges became cheaper and in 1858 gold badges second class were 1s 10d with white badges 5d each. Many men obtained their badges from private sources so a great deal of variety in cuts and sizes.  It wasn't until 1879 that standard woven badges appeared and true uniformity achieved.  In some cases 'make and mend clothes' was used for men to make their own badges. In 1860, white badges were replaced with red badges.

Those men looking after engines [engineers] were 'clever' men set aside from officers and the lower deck.  As the importance of engines grew they became recognised first as warrant officers then as commissioned officers. Getting ones hands dirty was unbecoming of an officer and gentleman but had to be done by somebody.  Thus in 1868 the department was reorganised.  A new ERA grade was introduced to do the work formerly done by junior engineers and their professional ability was recognised by making them CPO's.  They didn't take kindly to being dressed in a short round jacket or to wearing a badge on their left arms nor even living in the same mess as seaman CPO's, and they rebelled.  This rebellion led eventually to many changes.  Firstly in 1879, all CPO's shifted into a uniform with a peaked cap {with new badge} and a long jacket covering the hips.  Seaman CPO's continued wearing their badge on their left arm but the ERA's refused to do so.  Consequently, seaman CPO's lost their arm badges in 1890. ERA's demanded separate messing away from seamen CPO's and got it, and very soon they wanted a junior to help them carry out their duties particularly the dirty part and these helpers became mechanicians.  Really the ERA's wanted too much because next came a demand for more money than anybody else on the lower deck, and all this was easy to demand because they were highly sought after by all, navy and commercial.  The Admiralty were not going to be held to ransom and soon decided to introduce the Boy Apprentice Artificer grade who from the word go would do as they were told.  Eventually the original ERA's recruited as trained and skilful engineers straight from civilian street were supplanted by navy trained engineers.

In 1913 second class petty officers were abolished, and in 1920 all petty officers with four years seniority shifted in the fore and aft rig:  this four year wait was reduced to one year later on.  They were given the cap badges originally worn by CPO's.  CPO's were given a new badge in which the anchor was surrounded by a narrow wreath of laurel in gold. SEE BELOW FOR BADGES