HMS Mercury, the Signal School at Leydene near Petersfield Hampshire, was like any other HM ship or stone-wall frigate [shore Establishment], a place which practiced the religion of our country, Christianity, in whatever physical space was suitable and available for the occasion and for the envisage size of the congregation.

Sure, it had a recognised Church, but as often as not, God was worshipped in places like the Cinema, the Recreation Centre, the Drill Shed and the Wardroom.  Religion in the navy was always practiced with sincerity and reverently but mixed with a goodly helping of pragmatism, and, I dare say, for some, with ambivalence. Some services, like the annual Christmas Carol service, a Wardroom event, was always well attended, whilst other services in the Church proper were less so.

HMS Mercury's church proper, was a humble Nissen* hut {modified !} aptly named St Gabriel's, a small space but adequate for its purpose, bearing in mind that a large section of those who would, and did attend Church, lived ashore with their families and worshipped in their local Churches.  For many years it remained the only building overtly called a Church, until it became necessary to recognise families who were domiciled in the Lovedean "married-patch" {quarters a few miles distant from the Establishment}, who were unable to travel for various reasons. These families would benefit by having hands-on pastoral care, and anyway, it was considered a good idea to have a centre in Lovedean for family/neighbour bonding purposes. In this picture, St Gabriel's is shown as building 'G', sat high on a grassy bank overlooking the road below which ran through the southern section of the Establishment and also overlooking the rear of the Main House {Leydene House} which was the Wardroom. 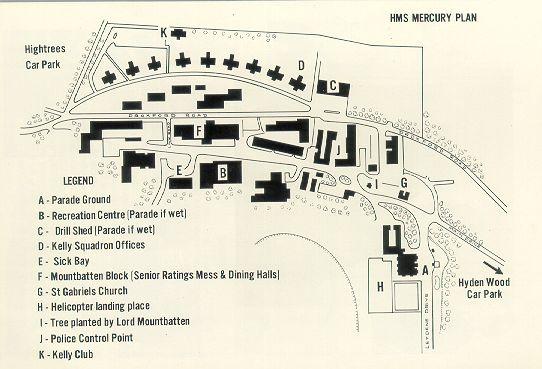 Thus, sometime in the 1970's it was decided to take one of the married quarters off the availability list administered by the MQO [Married Quarters Officer] to be thereafter administered by the Padre, at which time it was refurbished/refitted as HMS Mercury's Church House.  Church House was consecrated and had its own Chapel. This was 26, Crombie Close, Lovedean.  The GREEN DOT on this picture shows Crombie Close.  For the purists amongst you, the actual address is Crombie Close, Waterlooville, Hampshire, PO8.

The following image is taken from the April 1980 "Mercury Messenger" which was the official monthly news sheet for St Gabriel's.

The Naval Church is as much a part of the Royal Navy as is any other branch/department, and all submit their records to the Admiralty.  The Admiralty [MOD UK Navy] in turn has traditionally passed on some of these records to the NRO [National Records Office] now the NA [National Archives] at Kew, and Church records are filed in the Chaplain of the Fleet folder.  From those records comes the data which follows, covering BAPTISM's conducted in HMS Mercury from 1950 until closure in 1991, although as mentioned above, not necessarily in St Gabriel's Church. Why from 1950 and not from 1941 when HMS Mercury was first commissioned? That I cannot answer despite searching for one.  The reasons could be many: records not collected; records destroyed; no official Church until 1950; Church services conducted in ad-hoc places not consecrated [Wardroom for example] and therefore outside the scope of "records"; etc.  If you know the reasons why, then please contact me.  I feel sure that in those first nine years {1941-1950} part of which was in a time of total war and when people were generally more religious than nowadays, there would have been much worshipping and thanksgiving for the Victory and for remembering those who had fallen manifest [in this case] for the need for Baptising ones children.

Whether you yourself [or your family] are mentioned or not, there will, I am sure, be a familiar name in this data which you will recognise, and the associated dates listed may bring back memories of those times for you personally.

The National Archive records are hand written and sometimes difficult to decipher.  Note the signature of the Mercury's most famous Padre, namely that of John Scott. In presenting this data I have chosen to create a file for each year 1950 to 1991, 42 years in all and the start, 1950, being 58 years ago.  But before these are listed, a few names that I recall and no doubt you will be able to pen your own list as you travel through the years. Mine are, in no specific order:-

Numbers in brackets are the numbers baptised in that year.

This totals 395 souls who were baptised in the Signal School over a 42 year period - on average just over 9 per year, so the Padre was not exactly over worked.  Some were babies, others were adults, but all, we hope and trust, were the better for this experience. The worst year was a barren year, namely 1961 and the best years were 1968 and 1982 both with a total of 24.