Sadly, virtually all of the records concerning HMS Ganges were destroyed long ago. Quite simply, had these boys been officer cadets, this would not have been the case !

In the absence of this documentation, many myths and yarns were spread by the boys themselves, endeavouring to talk-up the establishment where in truth, there was little to talk about.

This situation was compounded by the corruption of data as quasi official sources printed data which wasn't, and never has been, verified officially. A point in question is the website http://www.naval-history.net/xDKCas1003-Intro.htm which covers pan Royal Navy deaths throughout the 20th and early 21st centuries. Although an excellent reference site, it nevertheless has mistakes, and readers should be wary of reproducing its data without first confirming it to be correct.

Further ambiguities occur from official sources of data, and they of course are serious.

I start my story with one such event where the Commonwealth War Graves Commission [CWGC] differ from the equally august and authoritative body, namely the Coroner who is a Crown Appointed medical person acting within the UK Courts of Law organisation. It is the job of a Coroner to investigate unnatural deaths to ascertain the cause of death and the reason for the death.  Evidence is collected in the normal manner [police investigation], witnesses are called, and above all else, the identity of the deceased is meticulously sought, often involving family or friends to view the body with all the trauma and anxiety that causes loved ones and pals. If the identity is not known [even from dental records] because of the condition of the body at post mortem/inquest time, the identity is not guessed at, and the case remains sub judice.

On the 27th March 1919, one day after the death of a man who died in RNH Shotley [for our purposes HMS Ganges], the Coroner for Suffolk, a B. PRETTY, held an inquest on Victor Alexander HILL who died at HMS Ganges on the 26th. The death was registered the day after the inquest [27th March]. The Government, then as now, who run the birth, death and marriage registries, recorded the man as being an ELECTRICIAN aged 32 who was residing in the Shotley Post Office and working in the "SHOTLEY BARRACK" [again, HMS Ganges] power generating station. Whilst working, this poor man died of SHOCK resulting from BURNS accidentally received. This is his death certificate.  His death in the link above is shown as 'drowning'.

Important note.  I was told on more than one occasion that showing death certificates was distasteful and unnecessary. I show them because they substantiate my stories [and each procured at a cost of £8.00] and bring history to life, pardon the ecpression before I get more comments. So to appease these people, all of whom I could name here, but nay, sod 'em I say, I have withdrawn some of the certificagtes but left the original entry as I wrote them back at the very beginning of the 21st century.

Normally, the case would end there, sad though it is, but some strange, almost bizarre thing happened next.

He was buried in St Mary Churchyard, and although he died as a civilian he is buried as a sailor of the Royal Navy. This is a picture of his grave stone. 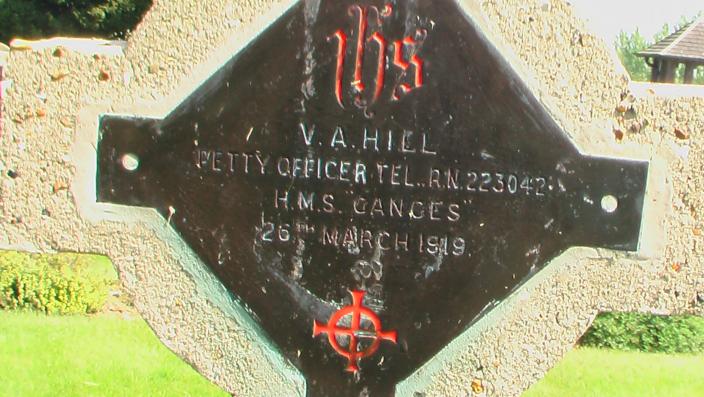 The dates of WW1 as far as the CWGC is concerned, are from the 4th August 1914 to the 31 August 1921, and clearly Victor had served in the RN as a Petty Officer Telegraphist, so upon his death still well within the war years, he was honoured with a naval grave and headstone.  A lovely story, but confusing during the research period. He wasn't, as first thought, a Ganges Instructor, as well he might have been recorded for posterity were it not for this research. In honouring Victor they could well have put his last ship on his tomb instead of HMS Ganges: this was HMS Pembroke.

Next we come to BOY TELEGRAPHIST Harry DAVENPORT.  Harry is correctly recorded as dying from an accident which befell him. He didn't die in HMS Ganges but at the East Suffolk Hospital in Ipswich on the 2nd July 1937.  He was just 17.  An inquest was held on the same day by the Coroner of the County Borough of Ipswich on the same day as the death occurred. He is not buried at Shotley and since he came from Manchester we can assume that his grave is there. Of all things he was struck on the head with a cricket ball and died as a result.  Here is his death certificate.

Finally, we come to BOY 1st CLASS George William RILEY, who died in RNH Shotley and is buried in Shotley's St Mary Churchyard. George is listed as being 'killed' in the link shown above, but this is far from the truth. He died of illness [as did so many other boys], from Diphtheria and Laryngeal Obstruction. Here is his death certificate.