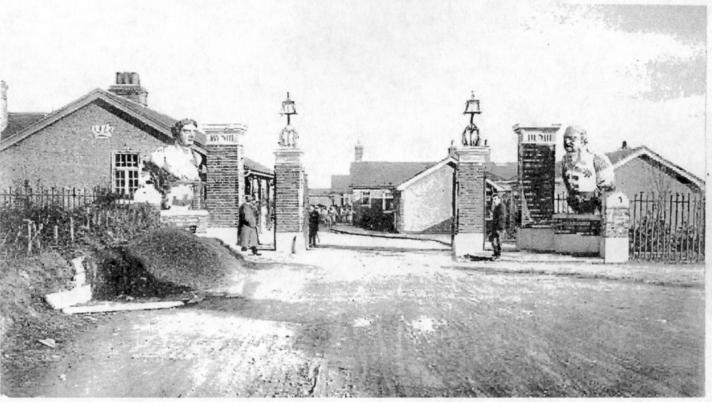 Weird, strange and different from 'our' time but these are the gates of the Shotley Barracks.  Caledonia on the left and St Vincent on the right, enough to scare most boys ! See this file for more gate detail GANGES EARLY PICTURES.pdf

The road, that's Caledonia Road, is not yet complete, and the cannons underneath each figurehead are not yet in place. Note the iron railings; to the left bounding the cricket pitch {where one day, many years later, the CMG would be built} and to the right, bounding what was later to become known as School Lane. Directly ahead of you is the mess complex which comprised of the CPO Mess, the WO's Mess, the School Masters Mess and the Wardroom. The time - late 1900's. A time when all boys were second class and "ordinary" ? "Ordinary" was later classified as GC - General Class - meaning boys of low to medium academic ability.  Such boys were taught by CPO Teachers fronted-up by a WO School Master, assisted by Boys' First Class as Pupil Teachers, later to go onto Teacher Training Colleges, subsequently to return to the navy as CPO Teachers. Post 1910, when Ganges began to train AC [Advanced Class Boys] the teachers were commissioned officers officially known as Instructors but colloquially known as Schoolies.

To answer the page title question would take up a great deal of space for the list would involve numbers approaching the 150,000 mark, so I will narrow that down and concentrate on the resplendent, the special, and the famous people who didn't march through the gates [all that is except for one person, a film star] but drove in style and great ceremony.  But even that would produce a long list and the names on it would be admirals of all sorts from rear admiral to admiral of the fleet. Therefore from this group of resplendent people, I have chosen a handful of our more important admirals who have paid visits to HMS Ganges over the years. However, we must not forget that during WW1,  Shotley Barracks had two commanding officers both of whom were rear admirals and that over the years many of her captains have been highly decorated officers, one the holder of the Victoria Cross, whilst one has been a Peer of the Realm:  indeed enough indigenous splendour in the establishment which many other ships and establishments did not experience. For many years post-WW2 the commanding officer of HMS Ganges also held the appointment of CAPIC [Captain in Charge] Harwich, and during the War the port had a Flag Officer and was called HMS Badger.

Over the years the establishment received several royal visitors as shown in the paragraph below. However, you might be surprised, given the present conditions in the Middle East, that in September 1928, the King [Pad Shah] and Queen of Afghanistan visited the UK on a State Visit.  The Amir of Afghanistan Amanullah Khan and Queen Souraya toured many areas of the UK [including Portsmouth Dockyard and HMS Victory plus a ride in a Pompey based destroyer] and were scheduled to visit the newly named HMS Ganges, the former Shotley Barracks. However the Queen was indisposed [as she appears to have been for one or two of her other visits http://www.andrewgrantham.co.uk/afghanistan/2250/visit-of-their-majesties-the-king-and-queen-of-afghanistan-to-swindon-works/ ] and the King sent instead part of his military entourage to visit the barracks. The King was a great friend of Rudyard Kipling who was a great friend of the Royal Navy and an acquaintance of the Captain of HMS Ganges Captain W T R Ford RN.  This friendship/acquaintance led to the famous Ganges poem "IF" and to the design of the Ganges Crest of an elephant {called HATHI} from his famous book 'Jungle Book' - see this page This leads to the official Ganges badge.html  It should come as no surprise that shortly after the King returned home to Afghanistan he abdicated [Islamic feuding] in favour of his brother Inayatullah and just three days later he too abdicated under severe pressure from political bandits. The country then as now, and despite countless thousands of brutal deaths, is corrupt in the extreme and unstable to the point of it being lawless territory.

Our own royalty paid eight visits as follows:-

What a wonderful day it must have been in 1961 for all in Ganges at that time, when our dear Queen paid her visit: her eldest child, son and heir was aged thirteen at this time, not too far removed from the age of boys' she was inspecting and she must have thought about this aspect as would any mother notwithstanding her station.

The Queens representative in Suffolk, the Lord Lieutenant came to Ganges with Her Majesty in 1961. The current Lord Lieutenant is Lord Tollemache and he is supported in his function by a Vice Lord Lieutenant and no less than thirty Deputy Lord Lieutenants. In 1973 one of those Deputies was a former Captain of HMS Ganges - see MY HMS GANGES CAPTAIN.

In the early 1950's recruits for boys' training [Ganges and St Vincent] but not others, were perilously low.  The reason for this as shown in my page GANGES TRAINING - WITHOUT THE MYTHS.htm was that parents were reluctant to send their boys into the naval schools which had an unknown, or unstated academic curriculum.  Apprenticeships were what all boys should aspire to and being just a plain 'seaman' led to nothing other than a dead-end job. To rectify this problem the Admiralty called in HM Government Education Authority.  As you may read, the outcome was welcomed by Ganges with no real adverse comment, but St Vincent were non too pleased with some of comments made by these ministerial investigators.

By far the greatest number of "visitors" to this and other barracks {other than boys] came here as patriots or as coerced men: I can find no women to add to my list. I am of course referring to the war years both first and second. Some of the names are well known, and although not Ganges men, two of them were Russ Conway and David Whitfield, who, after leaving the Service, went on to become high profile entertainers [No 1's in the hit parade for example] in the 1950's and 1960's.  Another well known figure is Sir Richard Baker, the journalist and broadcaster, who made a temporary appearance when first called-up before leaving to undergo his officer training elsewhere. On my list there are men who were elevated to the peerage and others who became MP's whilst of equal importance we remember the boys who went on to become admirals themselves, Sir Philip Enright KBE CB and Roy Clare CBE of the post-1910 period when AC boys were trained at Shotley, and perhaps the most famous admiral of this group was Sir Benjamin C S Martin KBE DSO, famous as the Captain of the cruiser HMS Dorsetshire at the time of the sinking of the Bismarck, who went to Shotley pre-1910 when only Ordinary Boys [GC boys] were trained.  This meant that after just three months basic training, he was despatched to the West Country to HMS Impregnable for AC academic training.  Because of this, he wasn't truly a Shotley boy in the accepted sense. Others we remember are two ex-Ganges boy Victoria Cross holders, Albert McKenzie [WW1] and James Magennis [WW2]. There were several media people plus a whole range of professional occupations ranging from barrister to teachers to accountants etc.

Whilst the vast majority of those who entered left still alive and well, a tiny minority left discharged dead [DD]. Since the arrival of HMS Ganges off Harwich in 1900 to 1940 when the boys left Shotley to be trained on the Isle of Man, a total of one hundred and sixty one boys {161} died, all but five {5}, a total of one hundred and fifty six {156} dying from the post 1905 Shotley Barracks stage. Of that number ninety four {94} are buried at Shotley, the rest being repatriated to their families for family burials. I tell that story on my award winning page GANGES AND SHOTLEY NAVAL BURIAL GROUND.  If you have a good broadband connection it will run well but even if your haven't then any sluggishness in opening can be circumvented by the use of your Refresh button. If you have a heart, then a handkerchief might be a useful addition to your viewing tools !  By the way, the bird sounds are real and genuine !

Moving to the other extreme, to the infamous, the very opposite of respectability and splendour we find that Ganges was the training establishment for a boy who was to become a traitor to his country.  Here is his story NAVAL TRAITORS

However, with all the foregoing in mind, there is one story about who passed through the gates of HMS Ganges which is intriguing and unique.

The person of whom I speak is an enigma and yes, was a patriot.

He was terribly well connected with many of the worlds film stars as his personal friends.

He had the ear and confidences of political leaders, and had met and was introduced to royalty.

His education and his family background led to "doors being opened for him".

He had written authoritatively about Lord Dowding of Fighter Command, Air Marshal 'Bomber' Harris and Earl Mountbatten of Burma with their acquiescence.

He was an accredited Fleet Street journalist and in addition had written a whole host of books including novels, twenty five in all, the first when aged twenty.

He was voted by his peers as one of the best reporters of all times.

As a broadcaster on television, he was often feared by interviewees one of whom was the formidable Malcolm Muggeridge, himself no slouch !

His mentor was non other than Somerset Maugham with great personal assistance on the early 'rungs of the ladder' from Cecil King and Lord Beaverbrook.

At thirteen he was a British junior tennis champion. At sixteen a boy actor in the Dame Sybil Thorndike's Company and at nineteen he was playing lead parts on the London West End stages.

At the outbreak of WW2 in 1939 when aged thirty three {33}, he immediately became a British War Correspondent writing for several newspaper, the BBC, and in a quasi manner, for the Admiralty itself. He soon specialised and became the most famous of Naval War Correspondent of the war. He had spent long period at sea with the navy at the 'coal face' and his reports were eagerly waited for and read by many thousands of people who had loved ones serving in the navy.  He was roughing it with navy but yet was not a part of it, at least officially: he was treated and talked of as being a mascot. His most famous warship was HMS Pozarica although he saw service in other ships too. In that ship he messed in the wardroom but was victualled in the senior rates mess for his tot issue !

And finally, this is a picture of the man when he was eighteen taken in 1924. 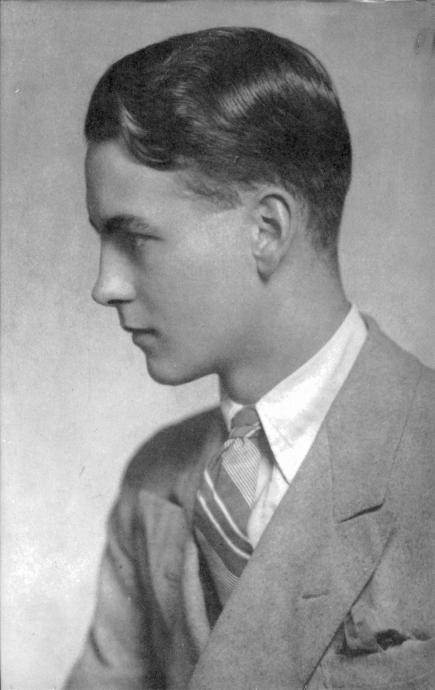 So, who is he and what has he to do with HMS Ganges ?

Look here for the answer.