Over the last many months I have received emails asking me about naval history which is not readily available in books or on the internet. I am known to like these stories and think that they are JUST AS IMPORTANT as the stories of officers and the wardroom.

Quite recently, an enquirer sent me a photograph of a sailor in fore and aft rig, wearing three buttons on his "tidly" cuff but no badges on his lapels.  It was taken on the Isle of Wight  in 1878, his ship being HMS Britannia at that time a cadets training ship and therefore, possibly working with the naval college at Osborne.   The person wanted to know when Chief Petty Officer shoulder badges were introduced ? Previously I had a young lady querying the year of a photograph which showed three sailors dressed in square rig, wearing white scarves, Burberry's and black caps slightly towards the back of their heads each with a pint of beer in his hand. It was a typical scene of those days and probably was taken at the time of a friends wedding or celebration. All wore the tally HMS Vanguard and one of the men was this young ladies grandfather.  She doubted the date shown on the back of the photograph because at that time dear old grandpa was already a petty officer, and these [to her] were not petty officers.

So I thought I would whet your appetite and show here some of the things that the three files above contain overall.

First off then the confusion about the man thought to be a CPO but why no badges ?

The man was a Warrant Officer with fewer than ten years service as such.  Had he been of a seniority of ten years or more he would have worn a thin stripe [¼"] above his three button.  Had he been a CWO [Commissioned Warrant Officer] he would have worn a ½" stripe but three buttons below.  A warrant officers uniform was the same as that of a commissioned officer, but there was some fancy sewing and pleating in the area of the jacket cuffs. A warrant officer by this time did not wear any badges. A warrant officers jacket/tunic was exactly the same as that worn by a commissioned officer and of course it was buttoned using four button's which  are still relevant to this day,  whereas a rating in fore and aft rig [a PO, a CPO and a post 1970 WO, has a jacket buttoned with just three buttons. 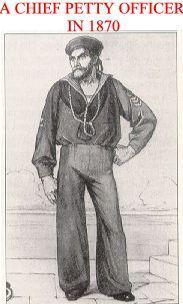 From the following picture you can ascertain the badges he wore on his left arm. The CPO changed over to wearing fore and aft rig in 1880 and this is his dress around that period. The CPO badge shown top left is, like all other senior rates, in two parts. The CPO badge proper is just the top half, the  crown/anchor and laurels. The bottom part are his GCB'S [good conduct badges] which at various times have represented time served measured from the age of 18 assuming that is, that he joined when aged 18 or before. Today, one receives a badge [what a soldier or airman calls a stripe] at 22, a second at 26 and a third [the maximum one could hold] at age 30. At the 15 year point when aged 33, one received a long service and good conduct medal  [LSGC] and cash gratuity. It is possible to be awarded a bar to the LSGC with further good conduct service. Each of those four badges above could well be shown with three GCB's for the PO 1st class, PO 2nd class and the Leading Seaman.

At the time this picture was taken, friend George [I bet ?] was the chief instructor on Whale Island Portsmouth - a fearsome place ! Note no three buttons across his cuff but two small buttons on the back of the cuff. CPO's got their buttons in 1902 during the Boer War and still wear them to this very day.  In 1881 gold badges were issued to ratings. Note the distinctive 3-button ratings jacket.

In the Victorian period, and  right up until George V's time, petty officer were of two types [the RCN for certain, were still using this system in 1963 and maybe longer]. They were first and second class rates. 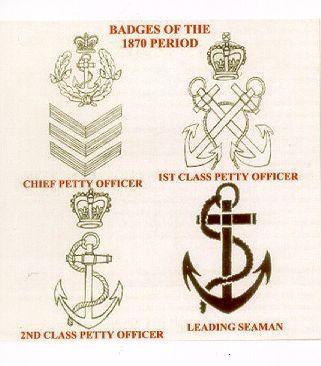 In 1920 first class petty officers who had been confirmed shifted into fore and aft rig [peak caps, tunic jackets and straight trousers].  First class petty officers had to wait one year from being rated until being confirmed in that rate.  This went on for many years, and I myself, rated in May 1962 wore square rig for the first year.  I used to hate wet weather [or cold weather] because I had to wear my raincoat [burberry] and thus to all and sundry, I was an ordinary sailor.  Given any and every opportunity, I used to shed my raincoat and walk proud with my crossed-hooks - anchors. Equally I hated the wooly-pully because I could not wear my medal ribbons. The young lady I mentioned above, asking about her grandfather, now knows that he could well have been an acting petty officer still wearing bell-bottoms.

In 1890 junior rates of the civil branch [what we know as coders, sick bay assistants, cooks, stewards, writers, stores assistants] started to wear long coats and peaked caps - fore and aft rig. They lost this perk in 1956 when they shifted to square rig.

As a snippet only, 1903 was hailed as 'the year of tins'.  Cigarette tobacco [tickler],  jam, coffee and condensed milk were issued in tins for the first time.

Lots of other myths and wild assertions abound, and many of these I have already "busted" in some part or other of this website. Quite recently, my wife and I attended a Trafalgar Night Dinner, and the subject of loyal toasts came up: whether we stand up or remain seated.  We remained seated as per tradition, but I had an almost impossible job [if I succeeded at all ?] in convincing fellow diners that tradition it may be, but a relatively new tradition.  We were reminded by a representative of the 'blind-leading-the-blind' that the tradition stemmed from low deck-heads in wooden-walled ships of the line and was moreover, a rite conferred upon the senior service [that is the wardroom only] from the Tudor period [Henry VII - 1485] onwards, with the exception of the Commonwealth Navy period [1648-1660]  when there was no Sovereign to toast.   In actual FACT nothing could be further away from the truth for the 'current tradition'. It wasn't  until 1959 that the then Second Sea Lord Admiral Sir St John [pronounced sin jun] Tyrwhitt  decided that "Loyal Toasts in future to be drunk sitting when the National Anthem is played in naval messes".   At a later period, in 1966, Admiral Sir Desmond Dreyer thought it fitting that what was good for the wardroom was also good enough for the Chief and Petty Officers Mess. He said "The privilege of drinking the Queen's health seated is extended to Chief and Petty Officers from henceforth."      So tradition yes, but not ancient tradition.  However, it should be understood that if the monarch is present at a naval function, then the rule of remaining seated is not exercised!

And finally, in the archives almost long forgotten, are some wonderful social pictures of ratings [one is a warrant officer who of course was not a rating prior to 1949] taken in a family environment.  I lost count of groups where all the boys in the family were in the navy.  In a couple of photographs, there are large groups of children, fourteen in one picture, where six were sons and eight were daughters. However, I am going to show my two favourite ones of two families each with seven sons, all serving their Sovereign. Have a look at these, and I am sure that you will agree with me that they should be framed and hanging in some museum or thoroughfare leading to a naval shrine.  Imagine the pride of these parents, and sons of course.