This is page THIRTEEN

The Victorian navy witnessed several Royal Commissions on Manning the Navy, and in between, Committees were formed to fine tune those arrangement. During and after the Crimean War, there was a great deal of unrest in the Royal Navy both on the upper and the lower decks but for different reasons. This had been brought to the attention of the House of Parliament by a highly competent MP, Captain Scobell RN Retired in February 1858.  Both affected the Administration of the Navy, but the lot of officers in particular brought a crisis to its head, when in February 1859, a requested Commission sponsored by Admiral Sir Charles Napier reported.  This Commission offered its report under two different headings: one the Manning Side and the other the Administration Side. However it was received with some caution as the recommendations of previous Royal Commissions on Manning and Service Conditions [1852 and 1856] had not been carried out to the full.

Although by this time the Implacable was at Devonport training a relatively few naval boys, this Royal Commission decided that naval boys training should be taken seriously and on a larger scale, and it is from this Commission that the story of boys being associated with HMS Ganges, Impregnable, St Vincent, Caledonia, Boscawen, Lion  begins, although the Ganges was a late starter and and early finisher in this task.

The navy has always had boys and the stories of cabin-boys and powder-monkeys are legend, but this part of history, mid-Victorian on, was a situation forced upon the Admiralty, and is the sole reason why boys were recruited into the Royal Navy at the time of HMS Ganges on other training ships.  It is very much a Victorian thing and not a Georgian or Regency thing.  Plain and simple, not enough men, directly caused by Britain's unprecedented success as THE world leader of the 19th century and the introduction of steam.  Before leaving this paragraph to continue the story, there are parallels in our more recent history when, in WW1 [but much more transparent in WW2] women took over men's jobs whilst men were away at the front fighting, and in the early 1950's immigrant workers were brought to the UK to do menial jobs because our indigenous workforce was stretched to the very limit rebuilding the economy and infrastructure ravished by six years of total war.

The recruiting of boys followed the status quo, namely that it was done via the Coastguard Services.  This was a typical poster of those days. 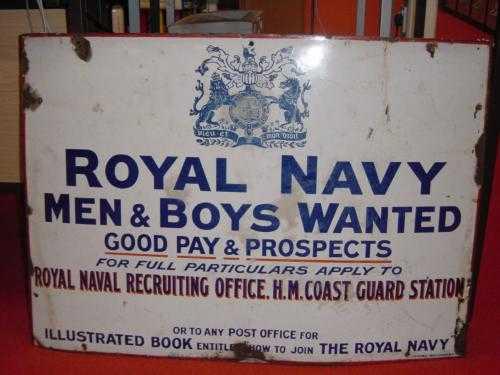 In many ways, in the mid to late Victorian period, there was a marked north-south divide, where, more or less, the Royal Navy was a southern England thing and the north of the country [apart from its sailors serving in the navy] knew very little about it. Whilst, as I have said, the Coastguards were pan country, the boys training ships were all in the south and that was a bad mistake on the part of the Admiralty. The main travellers during this period were the circus's, fairs, raconteurs, gypsies, jobbing labourers, quacks, barge boat men, railways gangs and wealthy people, but few ordinary folks wandered but more than a couple of miles from their homes. The positioning of the training ships was the result of research, and each was designed to have its own catchment area supported by "naval" schools aplenty: one well known one being the Arethusa for example and another the Royal Hospital School at Greenwich. The south coast, as is well known, is well endowed with natural ports and harbours from the Hampshire areas [Chichester, Langstone] and all ports West including Portsmouth, Southampton, Poole, Portland, Dartmouth, Devonport and Falmouth, whereas, to the East of Hampshire, there are no ports [Dover was manmade] until the Thames Estuary [notably Gravesend] and after it, the next suitable port heading North was Harwich. Although covering extremely large areas the harbours of Chichester, Langstone, Poole, Portland and Harwich were not chosen as being suitable: later, Southampton lost her ship in favour of a Portland mooring.  The ports of Portsmouth, Southampton, Dartmouth, Devonport and Falmouth were chosen and training ships were sent to each port. One training ship, HMS Northampton took older boys on joining for just six months training which was all done actually at sea. She sailed around the UK visiting all the ports and navigable harbours.

To say that the Admiralty system was complicated is an understatement, and just for example, here is a run-down on the most convoluted port namely that of Plymouth [Devonport].

It doesn't have to be said, but I will anyway, that the Admiralty had issued strict instructions to the Coast Guard that only boys from Group 'A' above would be acceptable.  Of course, this was no guarantee that all boys in this group would be diligent, healthy and well behaved.  Indeed, the problems experienced in the Implacable were caused by boys of this group coming from towns and cities where there was ample opportunity to get into mischief, but no opportunities in the navy which frustrated the boys. It was desperately sad that boys from  Group 'D' were not allowed in, although by about 1910 the Admiralty mellowed and accepted them on their merits. Boys from Group 'E' were debarred right up to the start of WW1 when the Admiralty relented because it was desperate to meet the quota set by Parliament.

The types of training ships used dictated the possible instructor/trainee ratio for accommodation and where possible this was maximised by commissioning the largest ship possible which was a 1st Rate ship of the line, a battleship. Three such ships were used, the St Vincent in Portsmouth Harbour, the Britannia in the River Dart and before that Portsmouth Harbour [1860] and the Howe [renamed the Impregnable] at Devonport. Other ships used were the Impregnable [Caledonia] Devonport/Rosyth, the Ganges Falmouth Cornwall/Shotley Suffolk, the Lion Devonport which were all 2nd Raters, and the 3rd Rater, the Boscawen at Southampton then Portland then Shotley. Brigs [two masted square riggers] were also used to supplement these larger training ships.

Many merchant navy training ships were in operation in the late 19th century period, and one in particular which was in Devonport waters at Saltash was the ITS Mount Edgcumbe. This was a truly sad affair by comparison with the naval training ships, and ITS mean Industrial Training Ship. It was a place for destitute and homeless boys. This paper is both informative and at the same time depressing. SAD TIMES FOR ABANDONED BOYS.htm  Also, on the Thames,  there was a ship, the EXMOUTH,  which was always officially referred to as the PAUPER TRAINING SHIP and which took London boys who were just that - destitute and abandoned.

Next page is FOURTEEN