FIGHTING SHIPS OF THE ROYAL NAVY

Ships that were still on the books of the navy whether operational and in commission, on loan to foreign navies, in refit, being repaired, or awaiting their fate anchored up some lonely creek.

LOSSES AND DAMAGE CAUSED BY ACCIDENTS

* Much to the sheer embarrassment of all, the event was the Royal official opening of the Forth Road Bridge by HM The Queen. On completion of ceremonies the ships dispersed and these two then collided.  ADDED on the 4th September 2017, 17 years after this page was first written and published. Today, HM The Queen with HRH The Duke of Edinburgh officially opens the new Forth Road Bridge. Let's hope that this time we are lucky because we don't have enough vessels to put in a naval presence on this occasion!

For those of you who think of ships belonging to  numerical types [Type 22 for example], or named after the first of a class [Leander for example], you might be remotely interested to know how ships in the table above were referred to.

Some, like the Tribals of the 60's, (where you had to know that the Ashanti, for example, is a tribe of Africans from Ghana, {who were renown warriors [known for the odd human sacrifice now and again], and now artisans and farmers} before you knew she was a member of this class),  all carried names of a common theme.  It was always easy to spot the ships with two names [or three - St Austell Bay and St Brides Bay] because of the word at the beginning or the end of their name.  In the list above, there are 18 Bay-class frigates; 19 Loch-class frigates; 24 Castle-class frigates. Just as easy were the ships whose names all began with the same two letters, e.g., CH etc. These were the CA,CH,CO [etc]-class destroyers. If your military history was good, you would readily pick out the Battle-class destroyers all named after famous battles from Agincourt through to Dunkirk, and the Weapon-class named after weapons like Crossbow etc- there were lots of them.

From now on, things begin to get more complicated.  The Daring-class destroyer was a most handsome type of ship, but not all ships beginning with the letter 'D' were Darings. There are eight Darings on the list with a further four destroyers also beginning with 'D'.

Are you au fait with  rivers, birds, hills, flowers, animals, villages, mythology, etc, because each and every subject was used to name different classes of ships and ocean minesweepers?

When it came to cruisers  it was easier, because there are only 25 of them against the 281 destroyers/frigates listed. The first group [the big boys] were named after Colonies.  Then came the Town-class, if one can call many of our cities towns!  Swiftsure-class, Sirius-class and others brought up the rear.

With just three mine layers, we wont dwell on their names!

As for battleships and aircraft carriers, the former were proudly stated to be 'a 15 inch' or a '16 inch' gunner, whilst the carriers were either described as Fleet,  Light,  or Repair.

Submariners had it the easiest because all they had to remember was the first letter of the name of the boat, which automatically pigeon-hole it.  It didn't matter that Alderney was named after a Channel Island [we didn't have 'G' or 'J' boats so Jersey and Guernsey missed out, and clearly, Sark must have done something wrong] and that Auriga was a constellation [the charioteer] home to Capella, the fourth brightest star in our skies some 42 light-years away [12.92 parsecs].

Of the remaining ships not specifically mentioned here, many have names from everyday speech, such as 'Cheerful' and 'Artful' for example. However, I do wonder about ships named after people!  What of: Michael and Sylvia?

Well, that concludes the story of the ships that were already there when I joined the navy.  What did we build in the 1950's, or complete from keels laid down after the war in the mid to late 1940's?

{MY PEN AND LINE DRAWINGS TO A SCALE OF 1:2290.  PLEASE NOTE THAT THEY ARE SYMBOLIC AND NOT INTENDED TO BE WORKS OF ART! HOWEVER THEIR LENGTHS ARE CORRECT.}

None of these ships was in service in 1983 when I left.  Ship building continued apace, and the following ships and submarines were built or completed in the 1960's.  Again, none of those shown in the table below was in service in 1983. It was in this period that we saw our first nuclear powered vessel, the submarine Dreadnought skippered by Peter Samborne*, and the launch of the beautiful lines of the GMD's [guided missile destroyers]

* This is Peter Sambourne

I SERVED
IN BOTH TIGER
AND BLAKE.

Blake [after conversion] into a Command and Control ship.

On into the 1970's then.  Just two ships which were built or completed in the 70's and which were not in service in 1983.  One GMD [more often called a destroyer light guided [DLG]], the Norfolk and the frigate

Click then Point to these chaps & have one on me!


Ark Royal on her last few moments at sea before entering Portsmouth Harbour [in fog] for disposal. 3rd December 2010 - a sad day!

It seems strange that any sailor who joined when I left over 20 years ago, will perhaps think of this 1983 navy as I did about the navy of 1950.  If you do, then do bother to put your navy together on a web site. 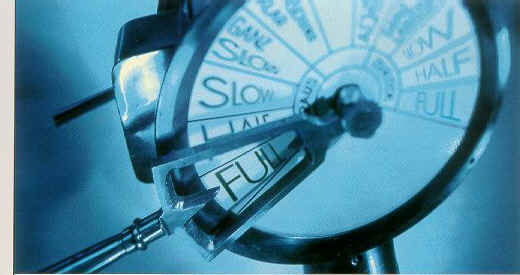 P.S.   In the meantime, keep the power on, and let's go full steam ahead for a good strong navy of the future.